After churning out a parade of sequels to all of their flagship games, has EA finally learned its lesson? Last month, EA CEO John Riccitiello said that his company is taking dead aim at Zynga, implying that perhaps the company understands what’s at stake, and is determined to be just as much of a player in digital games as it has been on consoles.

EA’s acquisition of PopCap Games, the makers of Plants Vs Zombies and Bejeweled, was a great way to convince investors (and fans) that it’s serious about making a play into online and social games. Granted, EA paid upwards of $1.3 billion for PopCap (with a market cap of right around $8 billion!), but it succeeded in snatching the casual game maker from the eager claws of Zynga, which made a $1 billion offer for the game developer.

On EA’s Q2 earnings call yesterday, Riccitiello reiterated that EA’s competitive advantage over Zynga and the other big game developers is the strength of its some dozen globally recognized brands, like Battlefield, Need for Speed, Mass Effect, FIFA and Madden, to name a few. The company has set a $3 billion target for online revenue, and is pushing its well-known titles into social and online verticals.

“This is a strategy only EA can deliver on”, the CEO said yesterday. “Our competitors either have too few brands or have not demonstrated the ability to project their games on multiple platforms”. 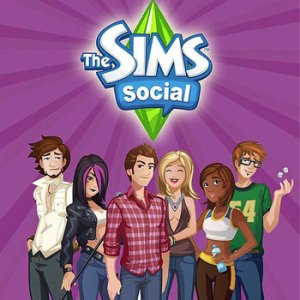 The earnings report backed up the CEO’s statement, revealing that sales of EA’s major sports titles like FIFA and Madden are up 20 percent year over year and digital sales are up 30 percent year over year. This boost was also a result of the company launching Sims Social on Facebook, which has risen to be the second most popular game on Facebook behind Zynga’s CityVille, with over 8 million daily active users and 40 million monthly users.

What’s more, EA shared yesterday that it has exceeded guidance expectations of $925 to $975 million in net revenue for the second quarter, with net revenue coming in at $1.03 billion. The company also saw its digital revenue grow to $907 million on a trailing twelve months non-GAAP basis, with strong growth in smartphone games leading to a non-GAAP revenue jump of 87 percent from the same time last year.

EA is still be viewed as one of the last remaining Big Kahunas of video game development and design in the U.S., and luckily for them, its console games don’t really show any signs of slowing down. The company said yesterday that it has sold nearly 8 million copies of FIFA 2012 and over 3 million copies of Madden NFL 2012 over the last quarter. What’s more, it’s already shipped more than 10 million units of Battlefield 3 and is already receiving reorders from retailers. With the holiday season approaching, the outlook for EA’s console games looks good.

On the digital side, thanks to EA’s big acquisitions over the last two years of PopCap and Playfish, PopCap’s Plants Vs. Zombies is now available on EA’s Pogo game site, and the company will continue to see increases in the number of users and sales as PopCap titles are released across EA’s platforms. Furthermore, to that point, the company said yesterday that Playfish increased Average Revenue Per User (ARPU) for the sixth consecutive quarter.

Yet, while EA now has a 25 percent share of the Western games market due to the strength of its sports and social games (Sims) and its pricey acquisitions, it also saw $657 million in operating expenses and a $340 million net loss for the quarter. Becoming a hybrid startup is not such an easy (or cheap) proposition. 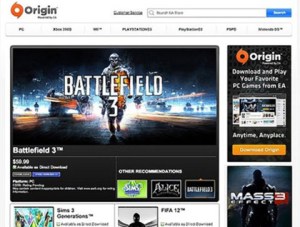 Of course, EA also slipped another interesting piece of info in its earnings report, saying that Origin, its digital distribution and DRM system that lets users purchase games online for PCs and mobile, has been downloaded by over six million consumers and has already signed big publishers like Warner Brothers Interactive, Capcom, and THQ.

And today the company announced that it will be opening up Origin to third-party publishers in November, which will likely bring an array of titles from smaller publishers to the platform. For EA, this is advantageous because it allows them to avoid the expensive task of development and marketing while still managing to distribute great content from large and small publishers and make money by taking a distributor’s percentage of sales.

With these further sources of revenue, the outlook for EA is becoming bright. It made some very bold moves in purchasing Playfish and PopCap for big bucks, but with those companies came top personnel talent and popular social titles. Of course, simply porting old console games onto new gaming medium and buying casual game developers doesn’t necessarily seem like an innovative $3 billion plan. Or maybe it’s that it seems too easy.

The real key is to balance old titles with new titles and develop a seamless distribution medium for its online titles — this is what will keep customers happy. Hopefully in trying to ramp up Origin to become a competitor with Steam and a source of significant revenue, EA can use that future cash to direct toward developing original, new concepts and titles that are optimized for mobile. That’s where the future lies.

Because, as Devin wrote in September: “Repackaging The Sims for a social setting was a cakewalk. Successfully repackaging Battlefield and their sports franchises is another task altogether”. EA is on its way, but it has still yet to prove hands-down that social, mobile, and digital games can become a significant part of its “new” DNA. And, as more and more EA execs jump ship to Zynga as it prepares for its potential $15 to $20 billion-valuation IPO, the company has to retain its top talent if it’s really going to give Zynga a run for the big digital money.