Last August, Google asked us all to say good-bye to Google Wave. Some said Wave was ahead of its time, some said that the platform had enough features to sink the Titanic. However, Google today announced some significant updates to its social network, Google+, among them that Google Apps users can now sign up for G+ — the integration is finally live.

And one of these features launched today on Google+ seems a throwback to one now-defunct feature of Google Wave, called “Playback”. Or at least one might claim this as its genesis, with the feature having its roots in-house, as opposed to some sort of reaction to Facebook’s much bally-hooed timeline that launched this September.

Yes, today, Google launched its new Google+ Ripples, which will let users “re-live” the conversations, comments, and sharing that’s taken place over the history of their use of Google+. Check out Google’s blog post here.

In other words, Ripples is a “visualization tool for public shares and comments”, which users can access by simply selecting the “View Ripples” option in the drop down window to the right of the public post.

From there, Google+ pops open a new tab, where users can see the activity in a nifty graphical interface, zoom in on particular events — seeing the innerconnectedness of it all. The diagram shows the post spreading across the network as other users share the post, with arrows “indicating the direction of resharing” and the circles within circles representing the “resharing sequence” with the larger circles indicating the heaviest sharing (and sharers), according to the Ripples description.

Users can also see a feed of who shared the post as well as click play on a moving timeline that shows one how quickly the post spread and to what extent it has been shared over the days, months, weeks, and years.

The intention here, according to Google’s blog post, is to “rekindle that initial excitement” when one shared their post and to get a better understanding of how the post is flowing across the network and just what kind of reach and collective viewing it was (and is) getting. 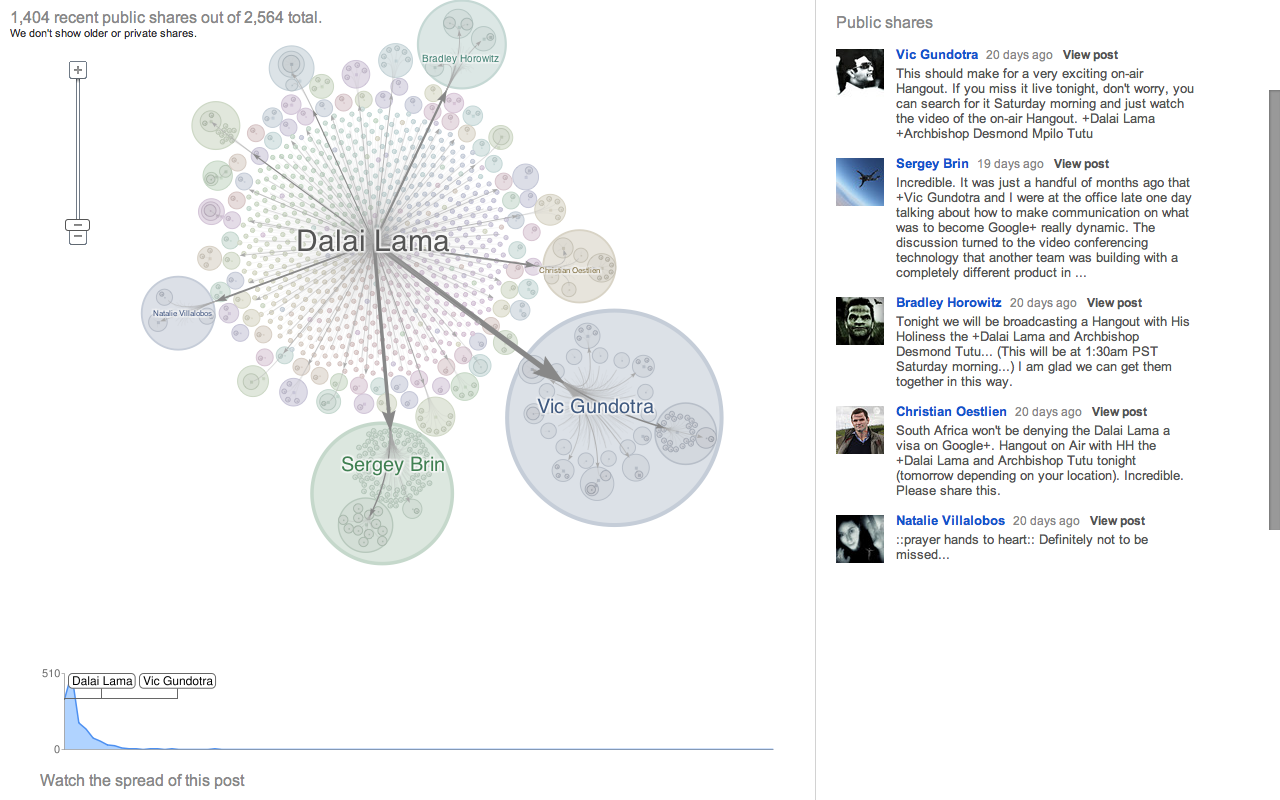 Google says that Ripples is still experimental and is looking for feedback on how it can be more informative and “more awesome”. But so far, so good. And, just to make one thing clear: Yes, Google did name this feature after me. Thank you, Google.

But the interesting thing here is how similar Google Ripples is to Google Wave’s “Playback” feature, which allowed friends to get caught up on what everyone else in a wave has already been talking about. This was essentially like rewinding the wave to see what happened in the past, with the ability to watch it progress through its many changes. Playback allowed users to jump around and see all the edits sequentially as they progressed in time to take some of the confusion out of the feature-brimming communication platform.

Another notable update announced today is the so-called “Google+ Creative Kit”, which in part is a bit like a suped-up version of Instagram filters. Creative Kit allows a deeper way to edit one’s photos on G+, enabling users to sharpen their photos, add text, crop, rotate, resize, or overlay that vintage look now so often associated with Instagram and Hipstagram. (Or as one commenter and Google engineer has pointed out, Creative Kit seems to be the native integration of Picnik, a photo editing startup Google acquired last year.) According to Google, all you need to use Creative Kit is “an idea”:

In the spirit of Halloween, Google has added some limited-time, “spooky” features to Creative Kit and is launching a photo competition (through the end of October), in which users can share their frightening photos on Google+ with the hashtag “#gplushalloween”. A panel of celebrity judges will pick their favorite photos and prizes may even be awarded. Though we’re checking on that last bit.

Ripples, Creative Kit, and Google Apps integration are certainly notable enhancements to the Google+ platform, especially as the latter has been a much-called-for and needed feature for the millions of Google Apps users. Photo editing features are a bonus, too, considering Google+ users have added more than 3.4 billion photos to the platform since launch. While basic photo editing tools have been available, Creative Kit takes Google+’s editing options to the next level.

And, in terms of further narrowing the gap between itself and Facebook, Ripples is a natural addition for Google+ as a content sharing medium. Both Ripples and Facebook’s impending Timeline are both unique visual ways of presenting our social data. Timeline will essentially allow users to replace their profiles with chronological scrapbooks, tracking your “most important” photos, content shared, apps, and so on back to the day you were born (for photos), or joined Facebook for everything else.

Ripples has a slightly different use case, as it is designed to give users a visual look at the ripple effect of their content sharing, the directionality of that sharing, and the popularity of a given topic. Both are nifty visual features, but whereas Timeline seems to have the potential not only to change your Facebook and social footprint at a deep level, Ripples doesn’t quite get there. It has the potential for a nerdgasm as a cool data visualization medium, which Google rocks in spades. But, really, the question becomes: How much will you actually use Ripples? And, since, in the end, it’s all about money, which has greater value for brands and future monetization?

For more on these new Google+ features, here’s the blog post.