Clever Sense’s local recommendations app Alfred was already doing a great job suggesting restaurants, coffee shops, bars and nightclubs using its artificial intelligence-based system. But today, it’s going to do something even more extraordinary – it will make suggestions based on who you’re with. This new feature, rolling out today through an app update in iTunes, will combine your personal likes and interests with those of your friends in order to suggest places you will all agree on.

In case you’re not familiar with what Alfred does, check out Jason’s earlier review here and his deep dive into its tech here. Simply put, Alfred is a smart, algorithmically-based recommendations system that understands what you like using something called model-based learning. This system lets Alfred build sophisticated, but highly personalized, recommendations. 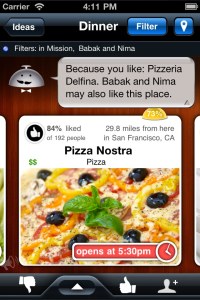 To generate its suggestions, Alfred sorts through hundreds of attributes associated with a given user. According to CEO Babak Pahlavan, each user has, on average, 200 of these “tags” that help Alfred understand a person’s individual interests. And this is in addition to an average of 24 explicit “likes” on Alfred itself. When combining and comparing these tags from one user with another, you’re now talking about thousands of data points Alfred has to consider. The breakthrough here is that Alfred can do exactly this, even for groups larger than two, with minimal impact to the performance of its recommendations engine.

In other words, Alfred just got a lot smarter but it didn’t slow down in doing so.

The group recommendations feature, however, only works if your friends are also Alfred users. To encourage your friends to try the app, so you both can use the new feature, the app now suggests you send them a text or email invite.

In the future, Alfred will begin to surface recommendations for other categories of businesses, but in the near-term, it’s working towards using its technology for deal recommendations. Instead of us being spammed with emails from daily deal providers like Groupon and LivingSocial, Alfred will use its knowledge of your personal interests to recommend which deals it knows you’ll like.

Pahlavan says this deal curation feature is on track to arrive by year-end. The company is also working on a Web-based and Android version of its system.

The updated app will roll out to iTunes users sometime today. 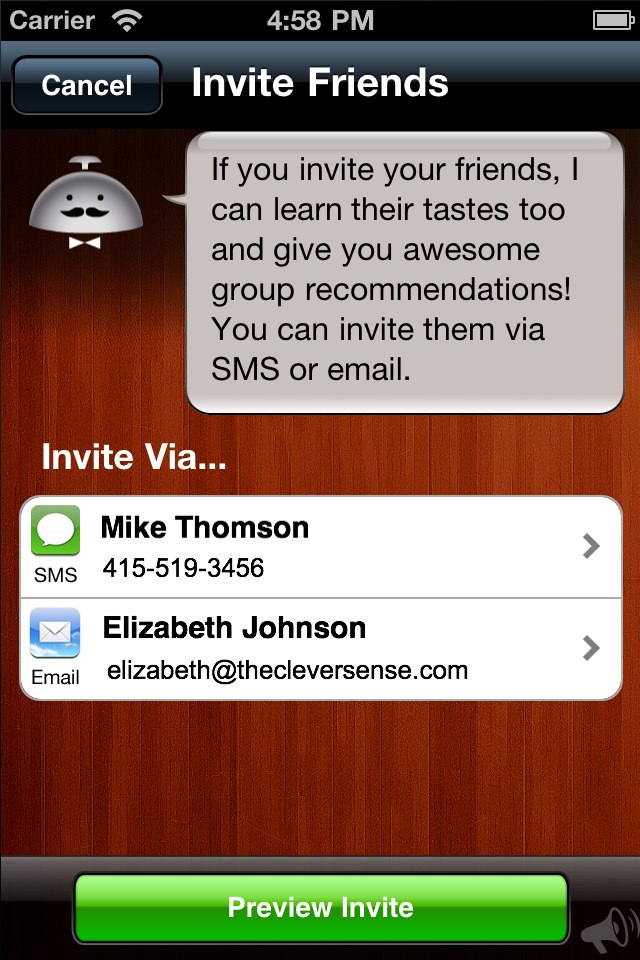