If you’ve had your eye on the Galaxy Tab 10.1 or Huawei’s new Springboard tablet, the sign-up pages for both devices have just popped up on T-Mobile’s site. On November 7, you’ll be able to pick up a new Springboard tab for no more than $200. We’re still unclear on exact pricing, but TmoNews seems to think it’ll go for $179.99 with a two-year contract. The Samsung Galaxy Tab 10.1, on the other hand, will be available on November 2 along with a number of other handsets.

As far as GalTab pricing goes, things are still a mystery. The Wifi-only editions are priced between $499 and $599, so a two-year agreement could bring that down to around $299 or $399. But we’ll have to wait for official word to be sure. 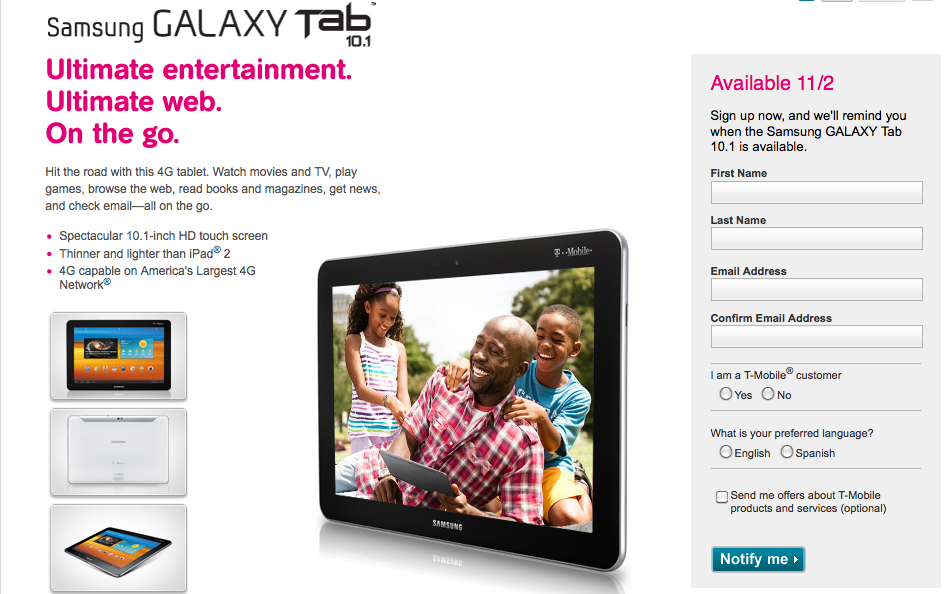 The Springboard tablet from Huawei is a little 7-inch tab with Android 3.2 Honeycomb running the show. Under the hood, you’ll find a 1.2GHz dual-core processor, along with a 5-megapixel rear camera (720p video capture) on the back and a 1.3-megapixel front-facing shooter for video chat. Both slates support Adobe Flash.

If you’re looking for more information on either slate, head here for the Samsung Galaxy Tab 10.1 and here for the T-Mobile Springboard.