Groupon has taken a lot of heat over the last six months, some of it deserved, some of it perhaps a bit excessive. There are definitely legitimate concerns about Groupon’s value for small businesses and merchants, but lofty valuations aside, we have to remember that Groupon is still a young company, and the future remains unwritten.

The daily deal giant’s IPO roadshow is scheduled to kick off next week, and ahead of that, Groupon released an updated SEC filing on its upcoming IPO, in which it announced that it plans to sell 30 million shares at $16 to $18 a pop, which means that it has to raise between $480 million and $540 million — all resulting in a valuation potentially as high as $11.4 billion.

Now, while Andrew Mason wearing a suit and a tie while pitching to potential investors is enough to make anyone nervous, the daily deals behemoth has taken some positive steps of late, namely its closing of the redemption loop with Groupon Rewards. Read Erick’s analysis here.

That being said, is it all sunshine and moonbeams for Groupon at present? It’s enormous valuation might lead one to see it as such, but the company shared its Q3 stats today, which were buried in its updated SEC filing.

As one can see from the graphs herein, compared to Q2, revenues are up 9.4 percent in Q3 2011 (to $430 million), which is certainly a good sign. However, going further back, this represents a slowdown from 32.7 percent Q2 over Q1 growth and 72 percent growth Q1 over Q4.

On the other hand, gross billings actually grew 24.5 percent Q2 over Q1, resulting in $1.15 billion for the quarter. And “Cumulative Customers” hit 29.5 million this quarter, up from 23 million in Q2, all in the face of a decreasing marketing spend and income (loss) from operations dropping from $101 million in Q2 to $239,000 in Q3.

Below, we see that Groupon’s income losses from operations had been growing from Q2 2010 through Q1 2011, and remained high in the second quarter of this year. The third quarter of this year, Groupon’s most recent stats show, represent a significant cut in operating losses, and while Groupon remains in the red in this category, the trend is certainly positive.

One thing worth noting, however, while far from being dishonest, is certainly conspicuous (and slightly annoying): You will notice in the ninth slide that Robin posted this morning (from Mason’s presentation to investors) gives a jumbled look at the map of significant competition Groupon is facing in the daily deals space. BUT. But, where is LivingSocial, I ask you?

Yes, based on the numbers Erick shared in September, Groupon continues to hold the lion’s share of the market at 54 percent, but LivingSocial isn’t exactly just a piddling little lemonade stand on the corner. LivingSocial owns at least 22 percent of the daily deal market, which you would think would give it a more prominent position on Groupon’s “map of competitors”. At this point, The New York Times has a bigger title than LivingSocial, which is pretty ridiculous. 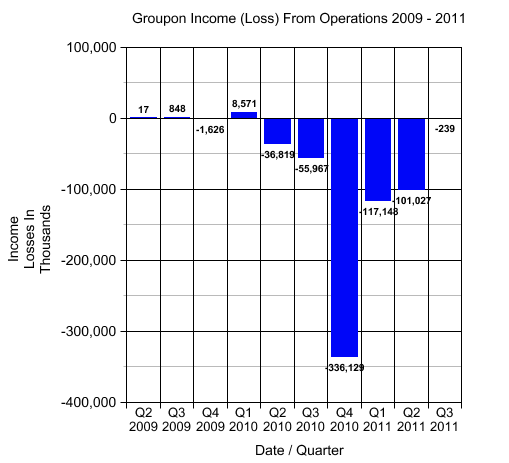