As the iPhone 4S hype has peaked and is returning back to stable levels, users from the other school of thought are getting pumped for their own massive event. Ice Cream Sandwich, and the next purely Google phone, the Samsung Galaxy Nexus, are due to make an appearance in just two short days.

Though we’re sure to get some clarification on already-leaked specs at the debut, we might have access to launch dates and pricing just a bit earlier than that.

According to an anonymously leaked Verizon document published by Engadget, the Samsung Galaxy Nexus and the HTC Vigor (codenamed Rezound) are going for a minimum advertized price of $299.99 on-contract. Both phones are also slated for a November 10 to May 10 MAP period, suggesting they may launch as early as November 10. But before we go any further, it’s worth practicing a little cynicism in this case, since this leaked document could have been whipped up in Word in about five minutes. Then again, the model numbers seem to make sense, so we’ll just venture forward with caution.

As far as that November 10 launch date goes, nothing’s set in stone. Even if that’s when the Galaxy Nexus and Vigor’s MAP period begins, the actual launch may come a bit later as we’ve already seen Ice Cream Sandwich and the Nexus event get pushed back once. Either way, it should give you a little extra time to start saving up. 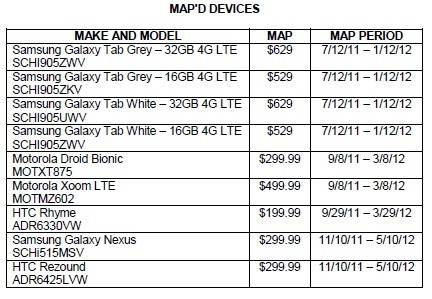