Toronto-based photography community 500px, the Flickr alternative which recently raised $525,000 in Series A, is now available on the iPad in app format. The new app includes all the feeds you would find on the site, including the feeds for Popular, Editor’s Choice, Upcoming and Fresh photos, plus access to your own photos and those belonging to your friends, the ability to like, favorite and comment on photos and much more.

According to 500px’s Creative Director, Evgeny Tchebotarev, the community has grown 20 times over the past 12 months, and now serves 54 million pageviews and sees 6.6 million visits per month. The iPad app is the first step at reaching a larger global audience through additional platforms, he says. Plans for iPhone and Android versions are also in the works.

The new app was built using the two-month old  500px API, which is already in use by a few third-party applications, including ISO 500, PhotoStacker for 500px, and 500px Land.

In addition to the above-mentioned features, the app also offers sharing options for Tumblr, Facebook, Twitter and email, the ability to view full-sized or maximized photos, landscape and portrait modes, safe browsing to filter out nude photos and support for slideshows. Future releases will add support for account creation (including registration via Facebook), photo descriptions and EXIF data support, the ability to move a photo while zoomed in, advanced image caching, uploads from iPad and offline support.

Although open to anyone, 500px is designed more with the needs of professional photographers in mind, and has attracted a growing community of Flickr switchers. The focus with 500px is on ease of use, design and tools that appeal directly to those who make a living from their photos, like the ability to create your own portfolio and blog, and the ability to sell your photos online. 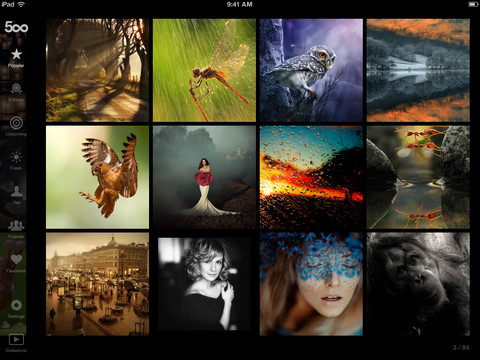 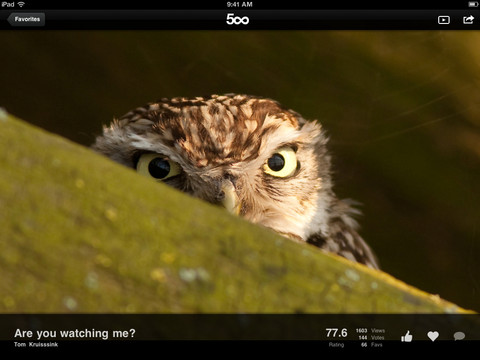 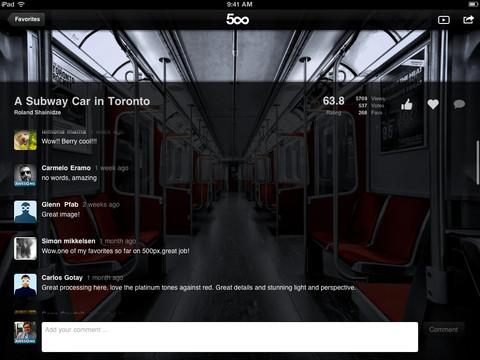