Canon has just announced the next version of their flagship 1D series of professional DSLRs, the EOS-1D X. It’s faster and better in just about every way, and few of you will be lucky enough to use one, since it goes for just under seven grand. But for the people who have used the 1D Mk III and Mk IV for the last few years, it’s looking like a worthy upgrade.

Pretty much every aspect of the camera has been improved. Perhaps the most modest upgrade is the megapixel count. At 18 megapixels in a full frame sensor, it’s got a bit more than the Mk IV but fewer than Canon’s other full-frame cameras. Canon says the new sensor that is says produces less noise than ever, and uses larger pixel wells than the Mk IV or 5D Mk II. These go through a set of three DIGIC 5+ image processors, which I assume is a small upgrade to the existing 5 series. It can fire 14 frames per second in JPEG mode or 12 when you’re writing RAWs.

ISO goes from 100 to 51200, and can be expanded to 204,800. That’s monstrous, though you probably wouldn’t want to frame the results. It also has a new 61-point AF system, and AF configuration tools like those on the 7D. 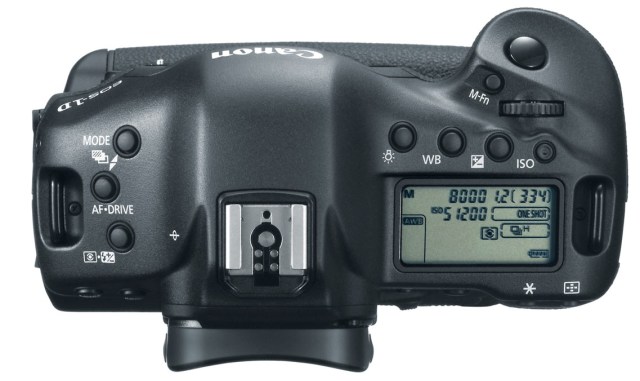 One of the image processors is dedicated to determine exposure, tracking a ton of different zones and hopefully producing faster and more accurate exposure. There is also a multiple exposure mode for doing what people think of as HDR, or just for capturing a photo in tricky light conditions. You can expose up to nine times for a single image, assuming, I suppose, the subject stays still.

Video has been improved quite a bit. The formats are the usual HD ones at the usual framerates, but they’ve made concessions to the filmmaking crowd, with whom the 5D Mk II has been such a hit. Canon has revamped the encoding method so you can choose between all i-frames and normal compression. Timecodes are also better, and audio levels can be adjusted on the fly. And now you can do longer continuous takes, up to half an hour of video, though it will still split it up into 4GB chunks due to file system restrictions.

Lastly, there are a few ergonomic improvements and a redesigned shutter and mirror mechanism. It has built in LAN connector instead of wireless, which is a little weird. There’s a wireless accessory you can buy, naturally, and a GPS thing, too.

The whole thing will set you back $6800. Yes, it’s a lot of money — these are mainly going to sports and nature photographers, people who need every possible advantage to get the shot. Taking snaps of the kids? This thing probably isn’t necessary. But I think low budget filmmakers might find it a compelling alternative to the 5D Mk II, assuming the claims of superior low light performance and reduced moire are substantiated.

The full press release can be found here. Unfortunately, I don’t think I’ll be reviewing this thing. I’d be too afraid I’d drop it.