Do you remember when photojournalism and photographic stories used to be a more central part of the news reading experience? Granted, those were the days when print publishing reigned supreme and photo-centric news magazines represented some of the highest circulation periodicals in American publishing. There’s no better example of this than Life Magazine, which sold 13.5 million copies per week at its peak.

Yet, Life’s print edition slowly sputtered out of existence over the years (finally closing the doors of its print operations in 2007 after a number of re-starts), and just as digital technology has forced publishers and media organizations to alter their approach to the distribution and monetization of their content, photojournalism, too, seems in desperate need of a shot in the arm.

Photography and photo-sharing have exploded in popularity thanks to the cameras on our smartphones and the countless photo apps and tools that make storing, displaying, and sharing our photos a breeze. While online photo albums and slideshows have become ubiquitous, quality photojournalism and photo stories that actually present a narrative (and even share news) just haven’t made the jump.

Once Magazine, a startup that officially launched its first issue on the App Store in August, is looking to breathe new life into photojournalism by offering a series of curated photo stories uniquely edited and designed specifically for the iPad. Working with professional photographers and writers to create complete stories that aren’t just aggregated clumps of photos from the Web (no slideshows here), Once wants to reach all those people that love photographic stories, whether they consider themselves professionals or casual Instagram users. It’s Life Magazine for the tablet age.

(For sake of full disclosure, I should say that I have known the founders and editors at Once for several years, and consider them close friends. While I have no personal financial stake in the magazine, I do admit a bias insofar as I hope they achieve fame and glory. Though, admittedly, this can be said for all the startups I cover.)

While print publishing and photojournalism may be going the way of the dinosaur, every day, people upload millions of images to their Facebook and Flickr galleries, Path and Instagram, and the growing demand for engaging and sharable photographic content presented in a non-snooze-worthy narrative is still alive and kicking. (Just ask Tracks.)

Yet, as iPad owners currently resort to viewing photo galleries and stories in Safari and photographers remain fixed to print publications where photo budgets are drying up at light speed, Once is hoping to take advantage of the new availability of sales data and the shifting consumption habits of readers on the Web to offer a new solution.

In an industry where contributors struggle to make money from their digital content, and publications likewise fight tooth-and-nail to monetize, Once is hoping to offer a compensation (and revenue) model that can address both of these pain points. For starters, the magazine initially launched for free on the App Store, but today the team has released its new paid version, which means that its issues are now available both as in-app purchases or via a discounted monthly subscription. (The cost of which is $2.99 per issue or $1.99 per month with recurring billing, respectively.) 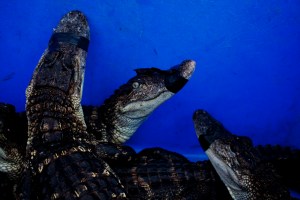 To entice photographers, Once will be splitting all revenue from App Store sales right down the middle (after Apple takes its 30 percent cut, of course). As it stands now, the magazine is advertising free, but moving forward, Once will slowly incorporate ads and will also look to begin selling physical prints of popular photos through the App Store.

Although Once has only been live for just over a month, the startup’s unique model has already added Dave Eggers (the award-winning author, co-writer of the screenplay for Where the Wild Things Are, and founder of McSweeney’s and 826 Valencia) as well as Pulitzer Prize-winning photographer Vincent Laforet to its advisory board. What’s more, Pulitzer Prize-winning photographers like Craig Walker, who contributed work to a private beta, continue to line up to participate in the Once experiment.

The reason for this seems largely due to the fact that the magazine has been designed specifically for the iPad. From the beginning, that’s been the focus — unlike the trajectory of the majority of publications, which start with a print product and then grumpily port their offline content to digital media and app stores. The hope is that starting from scratch will allow Once to bypass the baggage inherent in legacy print models and give them a leg up on the competition.

As to the content of the magazine, generally speaking, each issue of Once will include three feature stories, each of which will be introduced by a multiple-page-long essay. Each feature will include an average of 20 to 25 photographs, which are complemented by captions, audio clips, and interactive graphics.

Thanks to the high resolution of the iPad 2’s display (1024-by-768-pixel resolution at 132 pixels per inch, for those keeping track) the experience of flipping through these photo-essays on the iPad is more enjoyable than reading a magazine in print. The interface is intuitive, easy-to-use, and provides just enough supplemental bells and whistles without distracting from the star of the show: The mind-blowing photos.

Of course, the one problem with being an iPad-focused magazine is that Once doesn’t have the benefit of drawing from a ready-made readership. While the team doesn’t have to worry about the costs (and overhead) traditionally associated with print publishing, user acquisition will no doubt be the startup’s biggest hurdle going forward. To combat this, friend and Once Founder Jackson Solway tells me that the team is considering various ways to partner with existing publications, potentially offering teaser versions of their stories to high-traffic websites in exchange for prominent links back to the Once app. 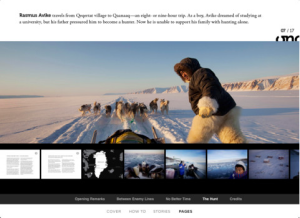 What’s more, with Apple prominently featuring Newsstand on all iOS 5-enabled devices, this will likely become a terrific source of downloads and eyeballs not only for Once, but for all publishers.

As Mark Edmiston, CEO of Nomad Editions, (which has a similar sharing model to Once, albeit with smaller rev-sharing percentages for contributors), recently told Johnny Biggs, publications that have previously found their app-only titles lost among the barrage of lifestyle apps and passed over by readers, Newsstand allows them to place their content front and center, which he believes will be a boon for publishers going forward.

As the Once team is composed of those who’ve previously worked at Wired, Getty Images, McSweeney’s, and Mother Jones, there’s plenty of publishing experience to go around, but with a 50:50 rev-sharing model, and prices set at levels that won’t scare away potential readers, the startup is going to have to sell a lot of issues to stay afloat. To aid in the quest for profitability, the team raised a small seed round back in March and is currently actively pursuing a larger second round of financing.

With a beautifully designed app that features some amazing photography from notable photojournalists, the Once experiment is already off to a good start, but the big question is: Can the startup’s rev-share model prove to be more lucrative for photographers and editors than current industry practices — are they tapping into the future of photojournalism? Or is this just another false start?

Weigh in and let us know what you think. And check out Once in the App Store here.