Mobile advertising startup AppRedeem has just launched App Trailers, a new product that rewards you for viewing videos about mobile apps. The service, available here from the iTunes App Store, doesn’t use the same model as typical incentivized install programs do today. Instead, users are given points for watching a trailer, then are provided with the option to download the app at the end of the video. Only if a users taps “yes” is the advertiser charged.

Says AppReedem, these types of installs will be more valuable to the advertiser because the user is indicating that they actually want to install and try that app. Users get the same number of points whether or not they choose to installs, so they’re really only downloading apps they’re interested in – there’s no bonus for tapping “yes.” 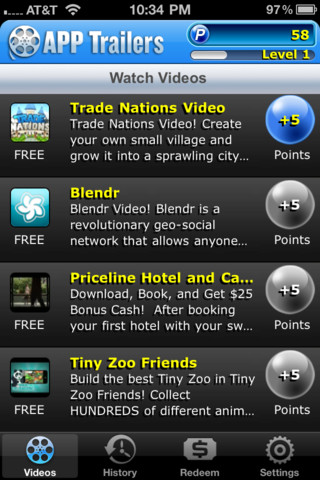 Each video listed in the app is worth 10 points, but users can get 25 points for registering their email or inviting friends to try the service.

Given how long it would take you to accumulate enough points to earn the top-level rewards, it’s clear this app is best suited to those who have a lot of free time on your hands. (Perhaps those without an Angry Bird addiction?)

That said, App Trailers is certainly a unique take on driving app installs in an increasingly overcrowded app marketplace. And who know? You might even discover a new app to try when the service ramps up a bit. Currently, there are videos for a number of popular apps, including Priceline, Groupon, LivingSocial, SkyGrid, PingMe, Blendr and others. The only problem? Apparently you don’t get any points for having all those apps already installed on your phone. Bummer.

You can try App Trailers for yourself from here.

AppReedem raised $700,000 from SV Angel and Blue Run Ventures in June. It also has an AppReedem-branded app on Android here.