Between your Google account(s), Facebook, LinkedIn, Salesforce, and whatever other services you’re hooked up to, there’s a good chance that a lot of the information you need on a daily basis isn’t stored in one place. Maybe it’s the address of a friend’s party (was that on Facebook or an email invite?), maybe it’s a key document you need for work (Google Docs or Dropbox?) — whatever the case, there’s a lot of potential for headaches.

Greplin is the service that’s tying all of that data together in one unified search engine. And today’s it’s getting a new feature that makes it significantly more powerful: in-file search.

The feature does exactly what it sounds like: it’ll now let you search your entire index of files for both keywords in the file names and within the file itself. Which means if you’re not so diligent about giving your files helpful names (*cough*, like me) then you won’t be out of luck — just run a search for a term you’re sure is included somewhere within the file. This is a big deal, because in many cases the existing services Greplin is indexing don’t offer in-file search to begin with.

Greplin cofounder Daniel Gross says that the service does this by combing through each of the files you’ve uploaded and extracting just the text, while ignoring data-intensive content like images. It can then compress this text, further reducing the size of the index file. The only catch? The feature will be rolling out gradually to existing users, because Greplin has to go back and reindex their file attachments.

Greplin is also announcing that it’s reached a new milestone, with some six billion documents currently stored in its index (it had indexed 1.5 billion back in April).

Gross also expanded on some of the trends Greplin has seen. First, he notes that while many people have established habits for how they search for things on the desktop, those habits are not nearly as ingrained on mobile, where search is still nascent— so Greplin is putting a lot of work into its mobile efforts.

And when I asked if people are generally uploading more content to the service (in other words, if people are indeed moving toward the cloud), he says yes, but there’s another factor at work that’s bringing the average document-per-user count down. Namely, the fact that a lot more ‘regular’ people are starting to use Greplin. He explains that previously, many of its users were technophilic early adopters with a ton of files, and these newer, more mainstream users tend to have fewer docs.

In other words, watching that average drop a bit is actually good news for the company. 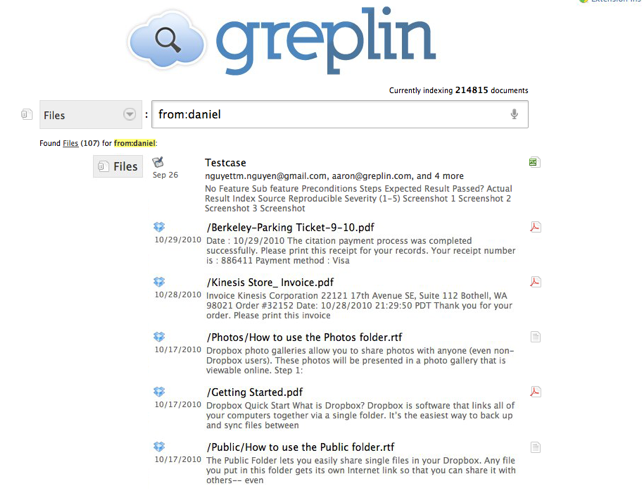