If you thought that AT&T’s Android lineup was a bit lacking, then today’s announcement just may change your mind. AT&T has pulled back the curtains on a fleet of five new Android-powered smartphones that should hit wireless retailers just in time for all that holiday commotion. 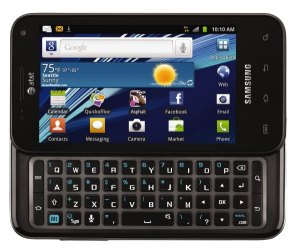 The new Samsung Captivate Glide may bear a resemblance to its distant cousins the Stratosphere and the Epic 4G, but the similarities are purely cosmetic. While this Gingerbread handset packs a similar 4-inch Super AMOLED display, it also has a dual-core 1GHz Nvidia Tegra 2 processor under the hood and 1GB of RAM to help keep things running smoothly.

As you can tell, it also sports a comfortable-looking four row keyboard, but perhaps less obvious are the HSPA+ radio, an 8-megapixel rear camera, and a 1.3-megapixel frontfacer. 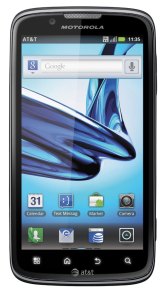 Motorola’s Atrix 2 actually seems like a mixed bag as far as upgrades go. It rocks a sleeker body than its predecessor, not to mention an new HSPA+ radio so users can finally push the limits of AT&T’s Faux-G network.

An unnamed 1GHz dual-core processor is calling the shots, which is a bit odd considering how proud they were of the original’s Tegra 2 chipset, and the display has been bumped up to 4.3 inches without a similar bump in resolution. That bit of stretching means that the Atrix 2 is working with a slightly lower pixel density than the original model, which may be a disappointment for current Atrix fans. It indeed runs Gingerbread, and an 8-megapixel camera capable of shooting 1080p video rounds out the package. 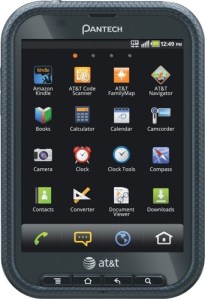 These two are the new heavyweight additions to AT&T’s portfolio, but let’s not forget the company’s new mid-and-low-range options.

Pantech joins the fray here with their Gingerbread-powered Pocket . It follows some of the design language used in some of Pantech’s other phones, which is my polite way of saying that it’s awfully squarish.

It’s got a 4-inch SVGA display, a 2GB microSD card, and a 5 megapixel rear camera. The Pocket lives up to its namesake by squeezing everything into a slim frame that’s only 11.3mm thick, so even the skinny jeans fans among you shouldn’t have too much trouble toting this thing around. 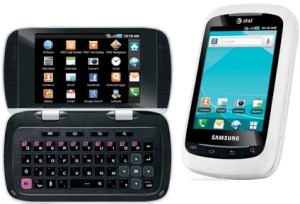 The Samsung DoubleTime gains the dubious distinction of being the only phone here to be stuck with Android 2.2/FroYo. Really? Even the ZTE gets Gingerbread?

In any case, the DoubleTime’s big gimmicks are its flip-open design and the internal and external touchscreens mounted on either side of the top half. It rocks a 600MHz Qualcomm processor, comes with a 2 GB microSD card, and will only be available in white with pink trim.

The AT&T Avail, made by ZTE, is the company’s second prepaid Android device. It’s pretty blase as far as smartphones go: it features a 3.5-inch touchscreen, and a 5 megapixel camera. That’s it. It seems like even AT&T is having trouble getting excited over this thing but in fairness, it’s probably meant to sell at a low off-contract price.