You may remember the “one DRM to rule them all” we heard about last year, UltraViolet. It’s essentially a DRM scheme that all the heavy hitters are getting behind, from device makers to content creators to distributors. Everyone, that is, except for one 800-pound media gorilla: Apple.

The last we heard of it was over a year ago, with nary a peep since then except the odd mention here or there and a more official debut at CES. But it seems that the sleeping giant wakes, as they’ve opened up registration for UltraViolet accounts. I’ve gone ahead and made one so you don’t have to if you just want to see what it looks like in there. 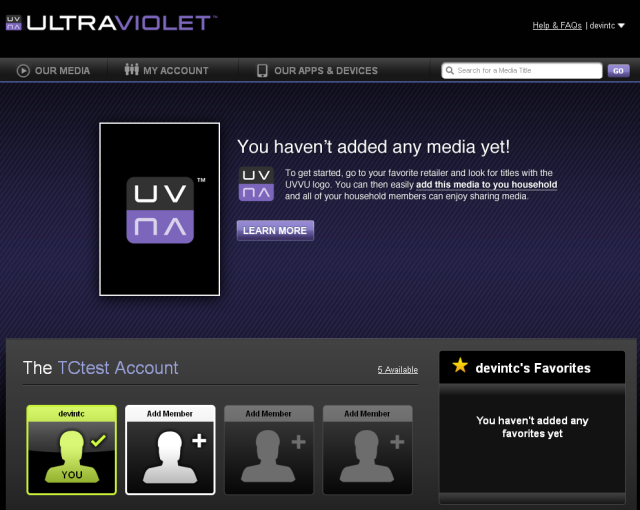 No, not a lot going on. It’s basically an empty shell at the moment; no one knows what UltraViolet is, and no one has any devices that support it — or if they do, they don’t care. Until more of the system is up and running, the functions and limitations will remain somewhat obscure. I’m not enthused by the design, but we’ll give them some time to tweak it before laying into them.

One thing to note is the constant use of “our” instead of “your.” That doesn’t mean them as in UltraViolet, but you as in you and your family and friends. The sharing of rights and permissions will be a key part of the scheme, though whether anyone will want to spend any time configuring “rights lockers” is doubtful.

As soon as we start seeing devices and services that support UltraViolet, we’ll give them a spin on the new management platform. If you’re interested in poking around the FAQ or want to be ready when the first devices and movies hit (early 2012, supposedly), register for your own account here.