It may be that the most compelling new feature of the iPhone 4S isn’t iOS 5 or the A5 processor, but the new camera. I’ve given phone cameras a lot of guff for the generally poor image quality that results from a small sensor and bad glass, but this really is a problem that camera-makers have been trying to alleviate. And the iPhone 4S is looking like the best effort yet.

Why should you care about the iPhone’s new camera? Let’s go down the list and make sense of the new features.

8 megapixels. Well. This one is self-explanatory, but really the least important. Other phones and small cameras have high megapixel counts, and really, you don’t want or need that many. The thing is all those tiny pixel wells have to be packed into such a small place that you end up with image quality problems. In this case your best photos will look better and it probably won’t affect other shots negatively.

1080p. As above, not really amazing in itself; other devices this size and smaller shoot 1080p. We’ll have to see how it looks in action, but I’m guessing you’ll be seeing a lot of distortion during camera movement due to the rolling-shutter effect on smaller sensors. 1080p resolution doesn’t mean 1080p quality, but if the sensor supports it, there’s no reason not to enable it. I’m just hoping there will be hacks to enable some better framerates.

“73% more light“. The new sensor features “next-generation backside illumination,” an upgrade to the upgrade that made the original iPhone 4 camera much better. We won’t know for sure who makes the camera until the teardown comes, but Omnivision did the last one and they have a newer version (the OV8830 pictured) with the exact resolution specified. It’s in the EVO 4G as well. The improved sensitivity probably isn’t the jump from 3GS to iPhone 4, but better low light performance is always welcome. Backside illumination essentially flips the sensor over so light strikes the light sensitive bits without having to navigate a forest of circuitry. 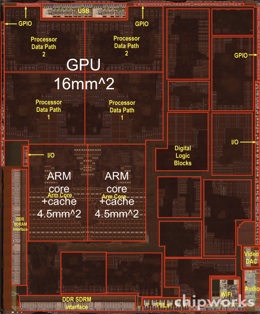 Faster picture-taking. The new sensor was described by Schiller as being “1/3rd faster,” which is a phenomenally vague description, but I’m guessing the onboard electronics are able to offload the image data 30% faster. But with these small sensors, what matters isn’t getting the image off the sensor but getting it processed, encoded, and displayed to the user. The A5 processor is still something of a mystery, but it’s no secret that a major focus was on graphics enhancement. As I suggested in that link, having a chunk of the CPU entirely dedicated to JPEG processing is a given. Chances are the next iPad will have similarly enhanced photo-taking abilities. So the combination of a faster sensor and an expedited pipeline for that image data to go through makes the iPhone 4S camera twice as fast as the competition (i.e. about a second faster by their measure, your mileage may vary) at making the shot happen. It also allows for more accurate white balancing and color tweaking, so your shots won’t look like they were taken next to a bunch of lava or under a blue sun.

Improved lens. The most important part of a camera is… the photographer — but right after that is the lens. And the lens of the iPhone 4 was already pretty solid for a camera phone: F/2.8 (apparently limited to F/3) at about 30mm equivalent focal length. The new one is f/2.4, about half a stop better, which doesn’t sound like much but at this point of the aperture scale counts for a lot. It’s a pretty big increase in the total amount of light hitting the sensor. The focal length wasn’t specified but Schiller mentioned it was “super wide,” which if wider than 30mm equivalent starts putting the iPhone into true wide-angle territory (starts around 24mm equivalent if you ask me) — but he may have been referring to the aperture. At any rate the half-stop improvement is real enough.

Real-time stabilization. This is a nice feature for small cameras, since, lacking heft, they tend to wiggle around a lot. I’m assuming it’s not optical stabilization, since that would require more space than they’ve got, so it must be electronic stabilization based on live image analysis. Again this is the A5 at work. By designing the camera’s image processor around the hardware (and vice versa), they can do this kind of heavy graphical analysis without taxing the battery too much.

Based on the specs it’s probably the best camera system attached to a phone on the market right now, though real-life tests will have to be performed next month to determine image quality and evaluate the veracity of Apple’s speed claims. The changes aren’t superficial, though, and the camera should be on the short list of reasons to consider upgrading.

Update: Image Sensors World points out a report (PDF) that has the Omnivision OV8830, not the OV8812, as the sensor (and it does make more sense, though the pixel counts are identical).