Redfin, the online platform for real estate search and brokerage services, has made some noise in the past, building a service that’s currently being valued at $230 million, at least according to trading on SharesPost. It’s been a little while since we’ve heard some big news from the Seattle-based company, but this morning the real estate brokerage is releasing a cool new feature that puts real estate agents on notice and gives home buyers and sellers a nifty “hot or not” comparison tool.

Redfin is today releasing the “Redfin Scouting Report”, a way for users to look up the performance statistics for over 1 million real estate agents in 14 major metropolitan areas, with information on nearly every agent in these cities, according to Redfin CEO Glenn Kelman.

Of course, many of these agents may not have been active in the last few years, so the report offers users scouting statistics like, for example, the ability to see how many homes the agent has sold, over the past three years, and in the past 12 months, where on the map those homes are, pictures of the homes, the average number of price drops, median price of sale, how often they’ve represented buyers versus sellers, and more. Redfin’s report will thus serve stats for agents’ performance serving both buyers and sellers. 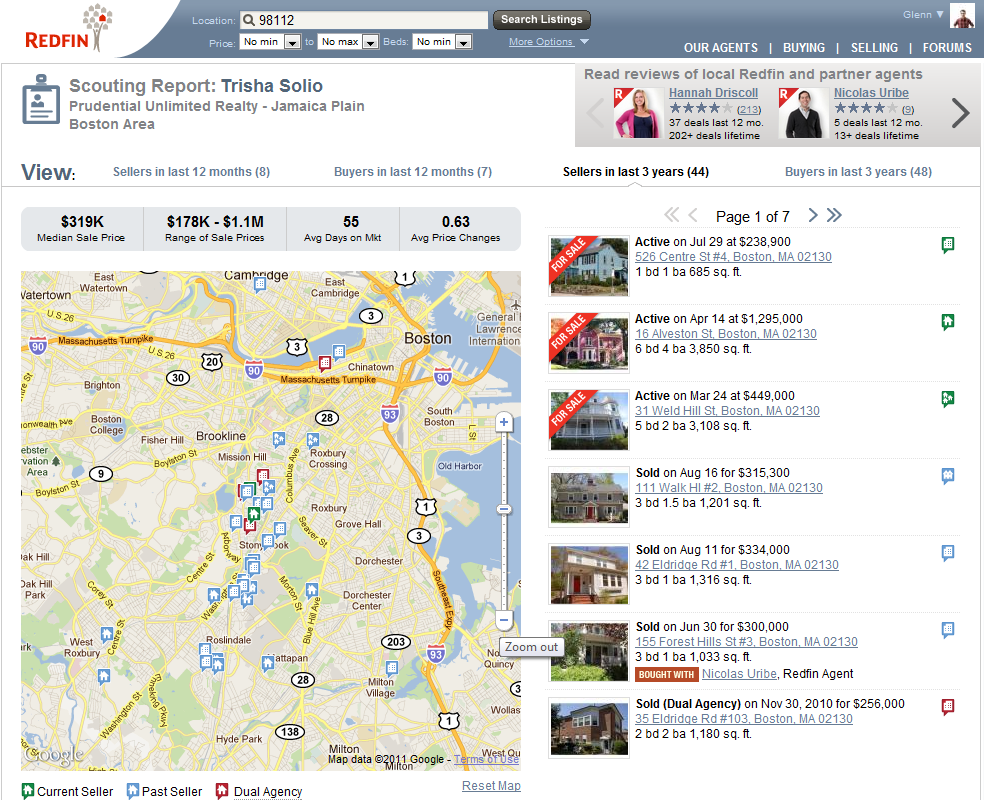 Redfin’s goal here seems fairly simple: With consumers being able to see how good their agent really is, they’ll be able to make fact-based decisions about which agents to use when selling their homes, tailoring a choice to their specific needs. It’s an interesting play, and could be an extremely useful tool to home buyers and sellers, and will certainly act as a wake up call to those less active (and perhaps shady) agents out there.

What’s more, with the real estate market as it is, the report also allows users to view how many distressed properties an agent has helped to buy — REO and foreclosure experience are very important to people right now.

In terms of the current outlook for Redfin at large, according to Kelman, the real estate company has now helped people buy or sell more than 10,000 homes and, though the site’s traffic is lower than Trulia and Zillow, Redfin only covers listings over a third of the U.S. — the downside to being a brokerage — yet it differs in its core business model. Redfin seeks to compete as real estate agents against other real estate agents, not as a media site serving traditional real estate agents.

The site’s value proposition also entails a more effective search offering than other sites, Kelman said, because the service offers all the homes that are for sale via a database used by real estate brokers. What’s more, instead of taking a percentage of sale, Redfin charges a flat fee to home sellers, paying agents customer satisfaction bonuses rather than commissions — and for buyers, it refunds up to half of the brokerage fee.

You can also find the Redfin Scouting Report here.