Earlier this month, third-party mobile app store GetJar announced the public launch of its GetJar Gold Program (previously in beta), a catalog of premium Android applications made available for free. Today, the company is providing an update on the catalog’s success: over $1 million in free applications have been downloaded in the three weeks post-launch, Get Jar says. It has also spurred an increase in GetJar’s free app downloads, too – a 5000% increase, in fact.

The GetJar Gold Program is interesting, especially in terms of how it compares to Amazon’s Android App Store. Where Amazon offers a time-limited “free app of the day” to Android users, GetJar instead provides an entire catalog of paid Android applications for free. Like Amazon, GetJar vets the apps for quality (they must be at least 4-star) and it requires they are ad-free. 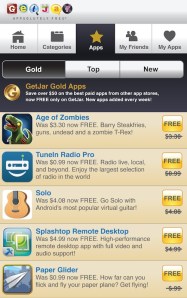 GetJar Gold makes the apps available for free to users, while paying the developer per download on a consignment style basis. The company itself generates revenue by offering sponsored listings within GetJar Gold to other application developers.

Using a model similar to Google AdSense, developers bid on how much they are willing to pay per install. The bids can be as low as 1 cent or as high as $1.50 to $2.00 per user. The higher the bid, the higher the ranking in the GetJar Gold search results. Also like Google, sponsored apps are clearly labeled and highlighted using a different color (blue).

The GetJar CEO Ilja Laurs says that Gold has been the most successful program in the company’s history, which is not surprising, given how much Android users like their free apps.

GetJar Gold is available on the GetJar.com website and mobile site.