Peak Games, a social gaming company that designs titles that target emerging markets in Turkey, the Middle East, North Africa, and South America, is making some significant announcements today, including acquisitions, partnerships, funding, and snapshot of the company’s continuing growth.

For starters, the company announced today that it has closed an $11.5 million series B round of funding, led by existing European venture investors Earlybird Venture Capital and Hummingbird Ventures. This latest infusion of capital brings the startup’s total investment to $19 million. According to the Peak Games team, the round will be used to continue expanding into emerging markets, to complete game studio acquisitions, and ramp up hiring and user acquisition.

Along with its funding announcement, Peak Games is today sharing the news that it has made two strategic acquisitions in the past few months, acquiring hardcore strategy game studios, Umaykut and Erlikhan, in an effort to continue bringing emerging markets (both studios are Turkish) to social gaming. Sidar Sahin, CEO of Peak Games, says in reference to Peak’s acquisitions, that one (among many) of the reasons the startup is focusing on core games is high ARPU and profitability. “The core games we’re running see up to $0.30 to 0.40 daily ARPUs”, Sahin says, “which is 10 to 20 times higher than resource management or casual games, for example”.

Founded in 2010, Peak Games has sought to both develop its own intellectual property, with games like Okey and TrendKiz as well as to partner with other big social game developers, like RockYou, which created Zoo World 2, The Broth (creators of Barn Buddy), and MagnetJoy (Pet Party), to create and publish versions of their games aimed at local, foreign markets. 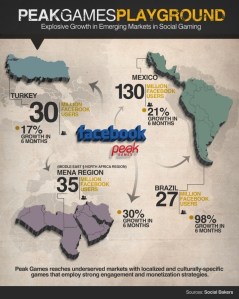 Because of its international focus, much of Peak Games’ early growth came thanks to games based on traditional Turkish and Arabic card and board games (like Okey, which is Turkey’s most popular online social game with 4.5 million monthly active users), but the company’s recent moves aim to make it more broadly applicable, both to hardcore gamers (with Umaykut) and to female gamers with titles like TrendKiz. And grow it has: Peak Games currently reaches over 16 million monthly active users, according to AppData, up from 10 million MAU in May, and has grown to the sixth largest social gaming company in the world.

As Turkey has become the fourth largest Facebook market, with over 30 million users (which represents over 87 percent of the online population), and as the market in the Middle East and North Africa continues to adopt Facebook and social networking at a breakneck pace (with the region expected to reach 250 million users by 2015), Peak Games seems well poised to take advantage of this burgeoning market.

By creating a portfolio of games available in the region’s local languages and are tailored to its cultures — along with its plan to bring social games to mobile platforms in these mobile markets, Peak Games is setting itself up to be the envy of the social gaming giants like Zynga and EA, which have predominantly U.S.-based user bases.

The U.S. social gaming market may be nearing saturation, and if this proves to be the case, Peak is off to a serious head start, especially considering the headway it has made in the Middle East. The company is still far behind wooga, which has over 35 million monthly active users and is well-established in the European gaming market, but the future certainly looks bright.