Put one big, fat candle on the cake. One year ago today, a startup named CloudFlare launched on stage at TechCrunch Disrupt in San Francisco, where the startup placed second to Qwiki. (You can read our initial coverage here.) For those unfamiliar with CloudFlare, the startup offers a free service designed to not only boost the speed of your company’s website but also protect it from those nefarious web-born threats that hamper load times and just generally make IT guys grumble. Not a sexy product, but one that’s necessary and integral to the success of web businesses.

To give a quick snapshot of how appealing this service is to eBusinesses: 365 days after launch, CloudFlare is now powering over 100,000 websites, with more than 5 percent of those seeing over 1.5 million monthly page views. From zero traffic to today powering a host of websites that see a collective 15 billion page views per month and more than 350 million unique visitors, CloudFlare apparently has a fairly significant silver lining.

What’s more, the startup quietly raised $20 million in November from NEA, Venrock, and Pelion (and told no press for six months) and in June of this year, the startup saw members of international, swashbuckling hacker syndicate, Lulzsec, sign up for its service. And all this with virtually no down-time.

As CloudFlare aims to silence the threats to performance and security for large and small web properties, in celebration of its first birthday, the startup is launching a new feature that has implications for both. As some are aware, ye olde Internets have been built on IPv4, literally the fourth version (or revision) in the development of Internet Protocol — the very addressing and routing communication standards that make the Internet the Internet.

IPv4 was developed in the 1970s, standardized in ’81, and is still widely deployed, yet it only has the capacity for about 4 billion devices to connect to the network, according to CloudFlare CEO Matthew Prince. As IPv4 runs out of space, the world’s web users will be forced (mostly unknowingly) to IPv6, a new standard that is still young and is incompatible with its predecessor.

The solution, says Prince, is a gateway, but typical gateway solutions are hardware-based, sold by companies like Cisco, and cost a boatload. So, today, CloudFlare is launching an IPv6 gateway that doesn’t require site owners to buy hardware, software, or change their existing infrastructure (i.e. a single line of code). And it’s free for CloudFlare customers.

Of course, this doesn’t take companies completely off the hook. Businesses will still have to upgrade their infrastructure in the future to support IPv6, but CloudFlare’s “Gateway” buys them time, allowing them to upgrade on their own schedule — as budgets allow.

According to Prince, more than 10,000 sites participated in the private beta of CloudFlare’s Gateway, which effectively doubled the number of websites that are available via IPv6. The CEO anticipates that, with its roster of 100,000 websites, many of those companies will take advantage of the free upgrade, potentially increasing the total number of websites now on the IPv6 web by tenfold. CloudFlare’s launch of its gateway could prove to be a valuable testing ground for the new standard, providing valuable insight for the inevitable future changeover.

Sounding like a typical founder with outsized vision (and tongue no doubt in cheek), Prince said that the CloudFlare team takes solace in the fact that the startup is doing its part “to save the Internet”. That remains to be seen, but with Lulzsec as one of its customers, I’m sure few will be eager to disagree.

For a snapshot of CloudFlare’s evolution to “Internet Saver/Superhero” (grain of salt needed), see the infographic below: 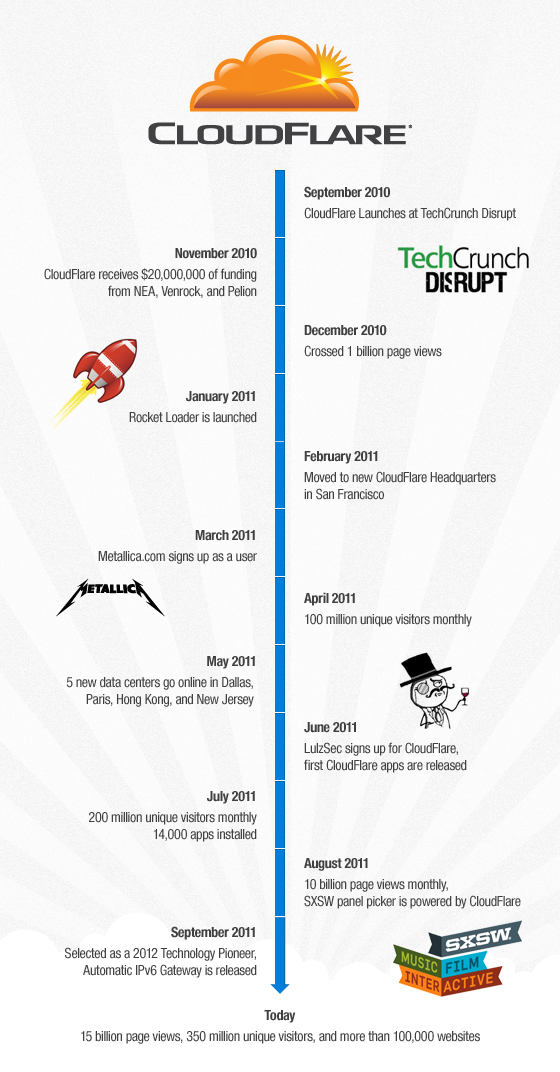