At Disrupt NYC in May, a startup called Meporter launched its location-based news app that enables every man, woman, and child to write, photograph, and record their own video of local news — as it breaks. Of course, recording will only take you so far. Meporter also allows users to share those very stories they cover with any Internet-connected and mobile-device-carrying person on the planet. Using Meporter, all those with iOS devices could easily use them to take a picture, make a video, and write their own story — becoming their own one-man or one-woman New York Times or TechCrunch — in a matter of minutes. Of course, we can’t recommend trying to become your own TechCrunch, but it’s theoretically possible.

Originally only available for iOS, the Disrupt alumni is now officially announcing the release of their Android app in public beta. Just like the iOS version, Meporter’s Android app will allow eyewitnesses and fledgling reporters to read and report the news as it happens, in realtime, on anything from weather and traffic to politics and sports. Meporter stories can then be shared with friends via Facebook and Twitter.

Since launching, Meporter Founder and CEO Andy Leff said that app has seen international adoption, with users posting stories on everything from local weather reports during Hurricane Irene to hotel fires in the U.K., capitalizing on its realtime sharing features in much the same way that has made Twitter a go-to resource during newsworthy events. 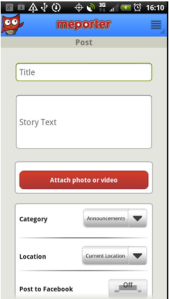 Just like your local newspaper, Meporter offers all the standard news categories, like announcements, classifieds, crime, entertainment, health, etc. to offer a robust news experience that lets users report on anything they choose. Yet with Meporter readers can see other users’ locations, comment on stories, check in as eyewitnesses, and it only works if reporters (and commenters) post on or near the location where the news is happening. Meporter wants to guarantee that the coverage is hyperlocal, as is the ensuing commentary.

With the launch of Meporter’s Android beta, the startup is extending its “Million Man Launch” contest to the Android community. What does that mean? Meporter is giving away over $28,000 in cash prizes to the first 1 million users who sign up and share the app with their friends.

This is a great addition to the game-ified layer of Meporter, which lets users earn “press passes” (i.e. badges) for posting stories, posting to specific categories, etc., which can be redeemed for actual prizes in the Meporter store. Granted, this “Million Man Launch” may sound a desperate ploy to get people downloading, but media organizations are willing to stop at nothing these days to get you on board. And real cash and prizes aren’t such an awful deterrent.

For more, check out Meporter at home here.