I’m not often the fan of startups that are “the this, for that,” but I think I could get into something like Deal Décor: it’s the Groupon for furniture. This San Francisco-based startup is using the group-buying model made popular by Groupon to connect customers with factory-direct deals from overseas furniture manufacturers.

The company is launching on Monday in San Francisco, which will serve as the pilot program for the service for 6 months. Afterwards, the plan is to launch in one new city every month, scaling up to reach the 20 largest metro areas in the U.S.

A closer competitor would be something like home goods-focused flash sales site One Kings Lane, or others in the space like Gilt Groupe or Ideeli. But those sites are offering steep discounts on high margin retail items, they’re not getting factory-direct deals.

The first deal being offered to San Francisco shoppers is a 3-piece sectional sofa that comes from Vietnam. Here it is on EverythingFurniture.com for $949. Amazon has it here for $706. Walmart lists it at $829. Deal Décor’s price? $399. Items are selected through the founders’ relationships with factories – they find out the top-selling items, and tack on their extra volume to the end of the production run, which keeps costs down. 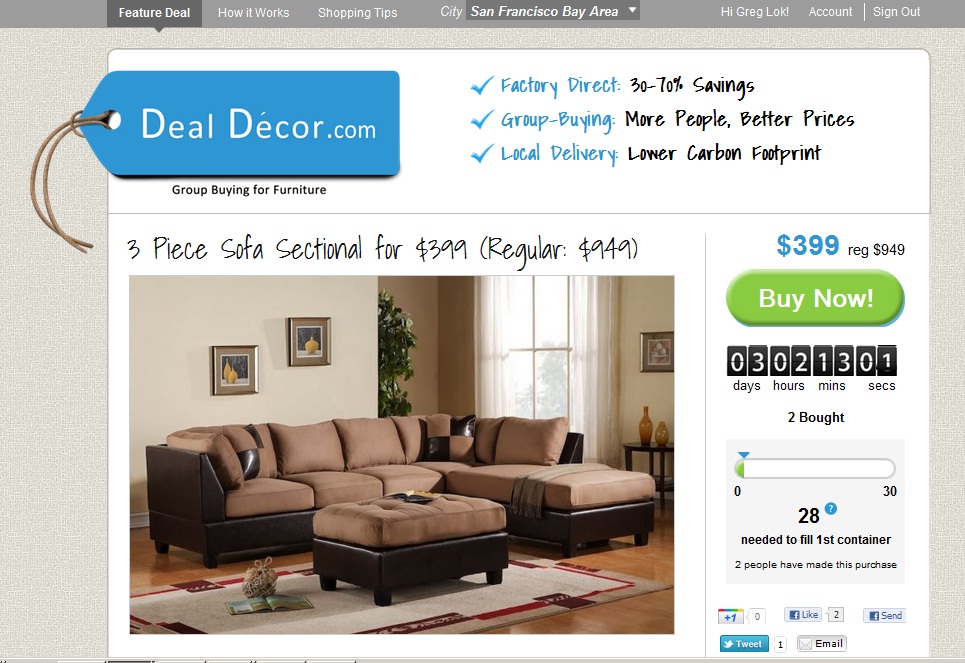 Further discounts are possible, too, because typical gross margins for furniture retailers tend to run 50% (sometimes even 100%) over wholesale pricing. But because Deal Décor is purchasing directly from the manufacturers, not the importer or wholesaler, its gross margins can be lower. As is its overhead. However, its net margins are closer to what furniture retailers make.

In addition to Vietnam, the company’s founders, Craig Sakuma and Gregory Lok, have built up a network of over 100 factories in Asia, including China, Malaysia and Indonesia.  The network was developed over the past decade or so through their experience at furniture retailers and companies like Home Depot, Target, Home Decorators Collection, William Sonoma and Hamilton Spill Furniture Group, where they worked in management, consulting and hands-on roles throughout the supply chain.

Of course, with Deal Décor, you might not have the plethora of options that a furniture retail store would offer in terms of customizations to the furniture itself, value-added services like leather or fabrication protection, in-store warranties, financing options and more.

But like some brick-and-mortars, Deal Décor operates locally, allowing the company to able to handle customer deliveries and returns locally, too. In San Francisco, the company partnered with a third-party logistics firm (also a FedEx partner), to handle warehousing, delivery and customer notifications. On top of the sofa’s purchase price, customers pay $6 to pick it up at the warehouse or $33 for home delivery. Deal Décor says it’s not making delivery a profit center for the business, though.

For those wanting to see the sofa in real life first, it will be on display in local venues like the Treasure Island Flea Market, for example. The same model involving third-party logistics and local venues for showcasing the items will be used as Deal Décor moves into other regions. (To see if Deal Décor is coming to your area in the future, check out the sign up form at the bottom of the company homepage.)

Eventually, the company hopes to offer more than one item at a time on its website per region, so there’s always a bedroom, dining and living room item available at all times.

Deal Décor is funded by Sakuma and Lok at present, but is in talks with several Bay area VCs and angels.