The analysts at Gartner have released a new report today, detailing tablet market trends and forecasts. Not surprisingly, their findings confirm the obvious: the iPad is killing it. According to the firm, the Apple iPad will account for 73.4% of tablet sales worldwide this year, and no other platform besides Android will have more than a 5% share of the market during this time.

In addition, Apple will continue to have more than 50% of the tablet market until 2014, according to research VP Carolina Milanesi, a stat that she attributes to Apple’s foresight to create this market in the first place, and Apple’s “superior and unified user experience  across its hardware, software and services.”

Milanesi suggests that competitors who don’t deliver a similar experience won’t be much of a challenge to Apple going forward. That said, competitors’ offerings did affect Apple’s tablet sales ever-so-slightly. Apple is projected to have, as noted above, 73.4% of the market in 2011, but that’s down from 83% in 2010. 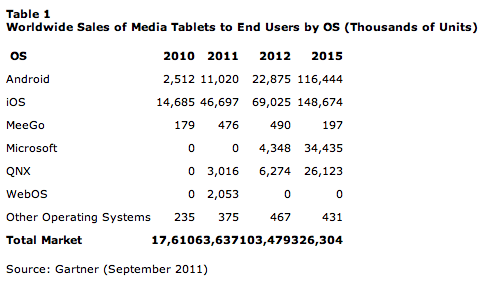 But Gartner is lowering Android’s forecast from last quarter’s projection, Milanesi said, because the platform has been “constrained by high prices, weak user interface and limited tablet applications.” The reduction would have been even greater, Gartner claims, if not for the success of low-end tablets in Asia and the expectation around Amazon’s Android tablet. (Which, frankly, the firm may be underestimating a bit.)

Not everything seemed entirely on point with the report. For example, Gartner called RIM’s QNX OS a “promising platform” but said the company is “going through a tough period.” That’s more than kind, given RIM’s troubles and plummeting market share. Calling RIM’s current situation “a tough period” seems to imply that the smartphone maker will reach the other side at some point, wipe its brow, and exclaim, “Whew! We made it!” Whether that will actually happen is decidedly unclear.

Gartner is less kind to Windows 8, whose future may be limited by its late arrival. The platform’s best opportunities may be in the enterprise, Gartner says.

As for anyone daring to take on iPad, the focus should be matching screen quality and processing power on the hardware side, with everything else considered “nice to have, rather than essential.” On the platform side, apps, an intuitive user interface and the ability to share content between devices matter most. Good luck, non-iPads. That’s a tough order to fill.