That one word is enough to elicit a remarkably strong response from anyone involved in tech startups — and oftentimes that response consists of a lot of derision and talk of a bubble.

The startup that famously raised $41 million only to see its first app promptly flop has been almost completely silent for the last six months, heads down on a project that was codenamed Blue, which we’ve reported on several times.

Today, timed to coincide with Facebook’s f8 conference, Color CEO Bill Nguyen is unveiling the new version of their service. And I had a chance earlier this week to see it for myself.

First off, Blue is just a codename — the new application being introduced today is called Color. And it isn’t going to be released to everyone today. Having learned from their initial failed launch, Color is babystepping this release, trickling it out to a group of Harvard students initially before it opens more broadly. When it does launch, it’ll be available for both iPhone and Android.

And, to be perfectly clear, my experience actually using the application has been limited to a few minutes tapping around during a demo — I don’t have it installed on my phone. The original Color only made its weaknesses apparent when you tried using it in the field (and noticed that nobody else was using it), so this isn’t a review, but more of a preview of the product’s changes and new features.

So let’s get to it: what exactly is different about this new Color?

The biggest change is obviously the deep integration with Facebook. In some senses, the new Color is really an alternative to Facebook’s default photo app, but wrapped in a very speedy and native package. You can browse all of your friends’ recently-uploaded photos, add photos to any album you’d like, and Like or comment on anything, the same way you can on Facebook.com.

But if Color is to be successful, then its future probably lies in the features that make it more than just a basic (albeit nice-looking) photo viewing app. The first differentiating feature is the concept of sharing photos based on proximity — in other words, the same feature that the original Color launched with.

The difference here is that unlike the first Color, which would show photos from anyone that had taken a snapshot near you, this version will show photos taken by friends of friends on Facebook. Pop open the app, hit the ‘friends’ button, and if any friends (or friends-of-friends) have recently snapped a photo near you, you’ll see it under the ‘Nearby’ section. This makes it more likely that you’ll actually want to interact with them, and it also means that Color can show you their name, and who they’re friends with.

The other big change is the introduction of the ‘Visit’. I’ll try to describe what this does with an example.

Say you’re browsing through Color, swiping between your friends’ photos, and you come across a snapshot your best friend just took of a tiger (hopefully at a zoo). Tap that photo, and you’ll have the option to ask your friend to let you Visit with them. They’ll immediately receive a push notification asking if they’re interested. If they tap ‘Yes’, then the Visit begins: their phone camera will immediately turn on, and they’ll start live-streaming a video feed of whatever they point it at (in this case, probably that tiger). It’s a lot like live-streaming services like Qik.

Visits aren’t FaceTime-esque chats, because they’re one-sided — your friend will be broadcasting to you, but you won’t be broadcasting to them (though in future versions you’ll be able to chat with them). The other major difference is that, if you friend wants to, they can share that Visit with other people, including one (or all) of their Facebook Friends Lists. If they want to, they can share it publicly.

This is where things could get really interesting. When you Visit with someone (or they create a Visit), that shows up in Facebook’s Ticker. Anyone who sees it can click on the Visit and immediately start watching the video stream, without having to jump to a different page or install Color’s Facebook application. Click the item in the Ticker, and a second later you’re watching the live stream (and then all your friends will see it in their ticker).

Which means these video streams can easily go viral. They don’t have to (you can restrict the privacy settings such that only your best friends can watch your Visit), but if a celebrity or journalist wanted to launch a potentially viral video feed on Facebook, Color could be a good way to do it. Which is why it isn’t surprising when Color says it’s currently in talks with news organizations that are interested in having their reporters start broadcasting from the app.

There are still plenty of questions. Facebook has been working on its own photo sharing app, though it’s unclear if this will ever be released. If it is, then it could compete directly with Color. And then there’s the even bigger question: will people actually be interested in these new features in the first place? Do they want to live stream video to friends, or see the photos that the people near them are sharing?

I’ll be receiving a preview version of the app shortly, and will post further impressions once I do. 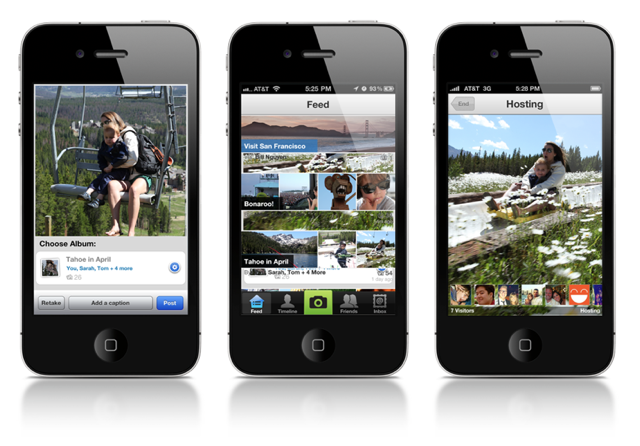