I don’t know about you, but I’m awful at remembering the lyrics to songs, and I often find myself turning to Google search to answer my lyrical questions — and frequently, to lose arguments. Apparently, I’m not alone, as “lyrics” is one of the most searched-for terms on Google. While a quick search is often all one needs to flick on the light switch, overall, lyric search remains a pretty disappointing (and frustrating) experience. There are tons of lyrics sites out there, but most of them are unofficial, don’t have rights to broadcasting free lyrics, or they’re hiding malware.

Founded in 2010, musiXmatch is a startup trying to solve this very problem by building a database of legal song lyrics on the web in the hopes of becoming the IMDB for legal song lyrics. So far, the site has collected over 5.5 million songs (in 18 languages) and is not only building a database that meets with international rights management standards, but it is also developing an API to distribute its lyrics to music publishers, services, app developers, and hackers. Phew.

Today, musiXmatch is announcing the official launch of its “musiXmatch Lyrics App” for Mac OSX, which is available for $5 on the App Store. The plug-in enables users to automatically view full screen lyrics for the music they’re currently playing and includes support for iTunes and Spotify.

The widget is still in its early stages, and the team said that it will soon be giving music fans the ability to search for lyrics by artist, song name, or keywords, and browse discography info on albums and artists — and share that info with friends through social networks. (Another cool update coming down the pipeline: Enabling listeners to automatically embed the lyrics into the id3 tag of your songs.) 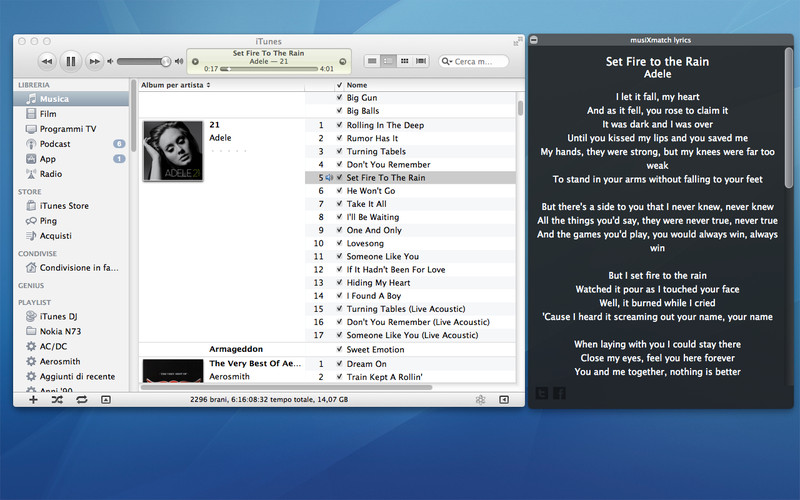 For iTunes and Spotify users like myself, musiXmatch’s widget is a pretty cool little add-on to the existing listening experience, as it automatically matches your iTunes and Spotify libraries (and automatically opens both), works with both platforms’ “radio” features, allows you to share lyrics to Facebook and Twitter, and receive Growl notifications. (And it works with Lion.)

In addition to today’s launch of its iTunes and Spotify compatible iOS plug-in, musiXmatch also shared with us that their mobile applications, which are available on iOS, Android, Symbian, and Windows Mobile, have been downloaded more than 1 million times. Over 50 percent of those users are active on a daily basis.

musiXmatch’s mobile solution allows users to easily find and match lyrics for their entire mobile music library, and with desktop availability, a sweet API that lets developers easily distribute kosher lyrics, the startup is becoming a very appealing service for everything from radio streaming platforms and video services to tablet apps and OEM manufacturers. With partnerships that include BMG, Kobalt, Universal Music Publishing Group, and Sony ATV Music, among others, musiXmatch is becoming a very interesting business and platform.

But, what about competition, you say? Well my friends, look no further than TuneWiki. While musiXmatch is an up-and-comer, the well-funded TuneWiki has been going mobile with its lyric-centric social music player for quite some time now. MusiXmatch is, now, essentially the European equivalent. It will be interesting to see how the two vie for marketshare going forward.

Which would you choose, or both? Check ’em out.