It’s not very often I get to write that it’s a good day to be an HP employee. But it’s also not everyday that HP employees are offered some of the last TouchPads.

The company is set to release a final batch of the $99/$149 HP TouchPads to employees starting September 28th at 9:00am PDT. This is per an email I received from an HP employee (embedded after the jump), which notes TouchPads are available on a first come, first serve basis and employees are only allowed to buy one TouchPad — which some will likely list on ebay where TouchPads are currently selling for over $200. The sun is setting on the TouchPad’s life and HP is likely ready to move forward, thoroughly burned by their venture into the land of the iPad.

This comes, as stated in the email, as HP is “clearing out inventories and winding down manufacturing operations.” HP previously canceled the TouchPad and allowed retailers to clearance them out at an astounding price: $99 for the 16GB and $149 for the 32GB. Stores sold out nearly overnight, leaving some hopeful that HP would release another batch. Unfortunately the email I received doesn’t detail any other TouchPad retail sales although I would pay close attention to Best Buy, Amazon and HP’s website the days before and after the 28th. It’s such a good deal. 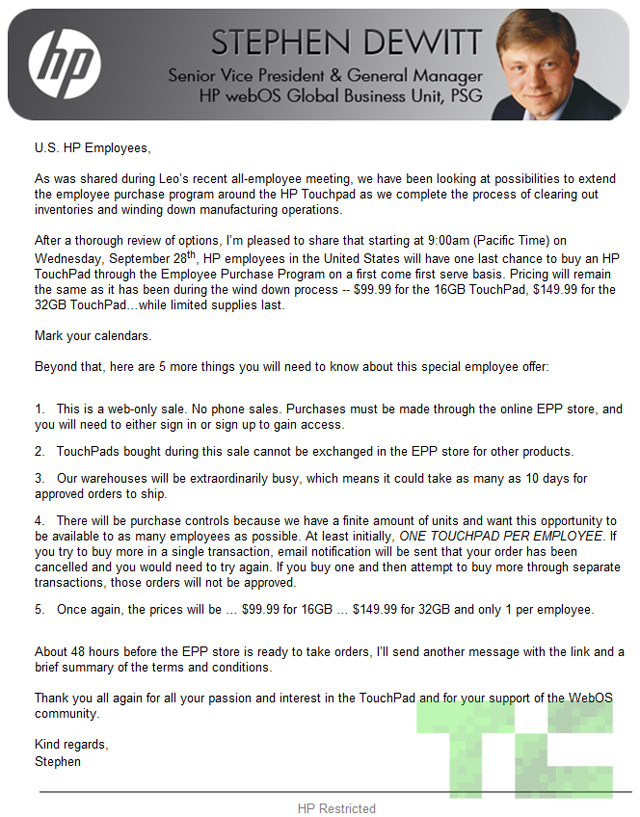