IntercastNetwork is a rich-media interactive platform that allows brands to connect to audiences using a combination of live-streaming video, real-time polling, live chat, Q&A, payment processing and more. The resulting platform works well for live broadcasters, who can track audience engagement levels and feedback during in real-time, and adjust their message accordingly.

Unlike LiveStream, Justin.tv or UStream, for example, IntercastNetwork lets broadcasters and publishers push live video feeds, including those from outside sources, directly to their own website’s homepage or others’ sites, where branding, features and other platform components can be more directly controlled.

IntercastNetwork grew out of Brand Knew, a full-scale digital agency with offices in Los Angeles and New York. Explains Co-founder Zachary Suchin, he and fellow Co-founder Jason Schutzbank refer to themselves as “a developmental venture equity firm” because, on occasion, they invest development and other services in exchange for equity in the venture.

Recently, Brand Knew was approached by a long-time ad veteran about building out a “QVC for the Internet.” But it was Jason who realized that the application for the technology could extend far beyond online shopping.

With the platform, publishers can push live video to viewers in a number of ways using the technology, including on Facebook tabs, microsites, mobile, or to homepages, through banners or expandables, for example. Alongside the main video window, real-time polling, chat, and other applications run to further engage the audience. With all these technologies combined, the broadcaster has something closer to a “real” conversation with viewers. They’re talking “with” their viewers, not “at” them.

For obvious reasons, this platform is ideal for politicians who give live speeches online. Candidates can immediately adjust their talking points on the fly based on the feedback they receive from the real-time analytics on the service’s backend. In addition, the platform includes a payment processing mechanism, which politicians can use to solicit campaign funds on the fly.

The company has a long list of interested companies, brands, politicians and others. We got a peek at the “in talks with” list here at TechCrunch Disrupt’s Startup Alley, and it definitely included some recognizable names in terms of global brands and well-known politicians. We can publicly confirm that NBC Universal will be using the service. And with election season just around the corner, know this: you’ll see IntercastNetwork in action very soon, somewhere big. 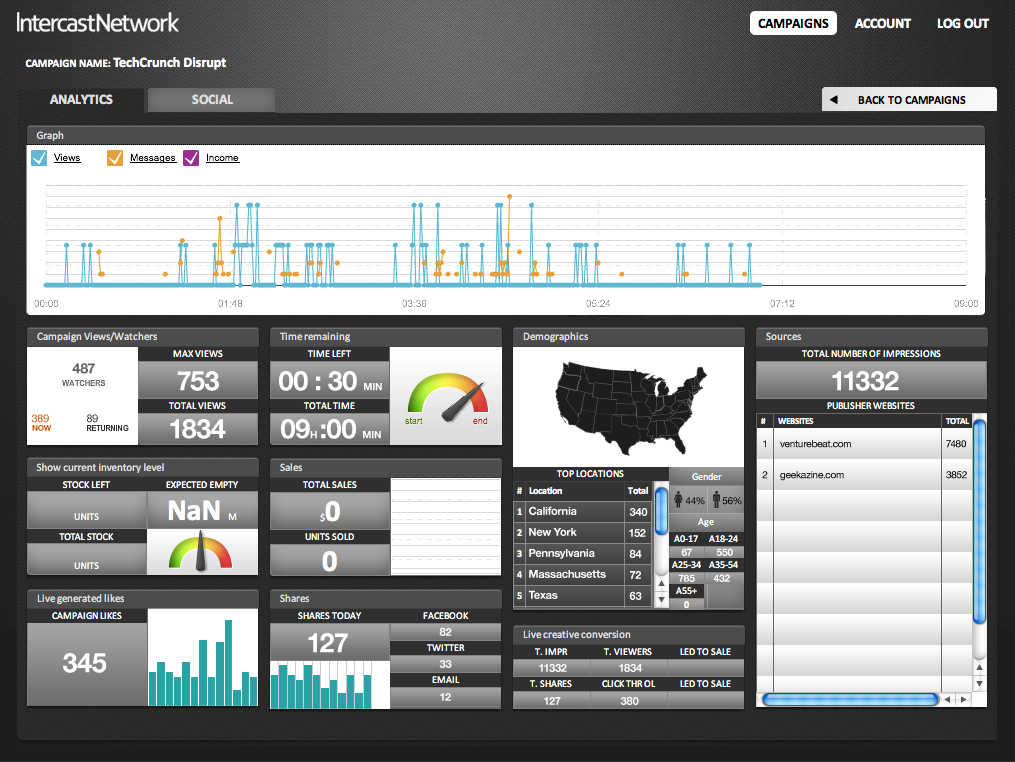