There are plenty of apps that let you watch TV and movies on your iPad: Hulu Plus, Netflix, Vudu and even trusty old iTunes. But how do you know what’s available out there? Guess what! There’s an app for that. Fanhattan just launched on the App Store, and it’s all about discovery.

When you load up the app, you have two options: Movies or TV. From there, Fanhattan groups content into genres like Hottest, Newest, Top Rated, Critic’s Picks, and Oscar Award Winners or Emmy Nominated Shows. But that’s pretty basic right? Fanhattan takes it a step further with Smart Browse.

The feature lets you check off certain attributes to narrow down results, like checking off the Action and Fantasy genres. Then you can decide that you only want to watch Action/Fantasy movies with a 3+ star rating. That narrows down your results even more, but you can continue to specify what you’re looking for. You can filter by release date, choose between services, filter by ratings, and then choose how you want the content to be sorted.

The app also connects with Facebook, letting you post your faves to your wall and get recommendations your Facebook friends. The app currently supports the following video streaming services: Vudu, iTunes, Hulu Plus, Netflix and the ABC Player. When you’ve selected the movie/TV Show you want to watch, Fanhattan automatically shows you all the services that offer it, and what it’ll cost you to watch. Maybe it’s free w/membership on Netflix but $2.99 on iTunes. Now you know.

The app also offers a summary of the show/movie, cast and crew information, Rotten Tomatoes reviews, clips from the movie, iTunes prices for the soundtrack, and even where to buy “fan gear.” Fanhattan also offers up similar movie titles. 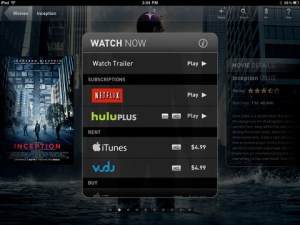 As far as the UI is concerned, the gestures and layout are very intuitive but I did experience a few choppy moments scrolling around. Obviously, these are things that can be fixed with an update, but it’s worth mentioning. Another little bug I noticed was that when you click into the Watch Now panel, Netflix-supported content doesn’t have a link the same way Hulu Plus and iTunes do. Not sure why the app is forgetting about Netflix, but again, it shouldn’t be too complicated a fix.

As more and more content becomes available on iPad, the more a way to sort through it will be necessary. Fanhattan seems to be ahead of the curve.

Fanhattan is available today on the iPad as a free download from the App Store.

Update: So it turns out that that Netflix bug was cleared up before launch. It only showed up for me because I was using the pre-release version of the app.