The cloud is now your hard drive. And not just a few dozen Gigabytes, Terabytes or even Petabytes, but all of it – infinite storage – for only $10 per month. This is the incredible promise of the new TechCrunch Disrupt finalist Bitcasa.

The company is launching a new cloud storage, syncing and sharing service that blows away its competitors, including hard drive manufacturers and online services like DropBox and SkyDrive, with ease. In fact, beyond the pricing and limitless storage, the most disruptive thing about the service is its complete integration with your device. You don’t see it, it’s not an icon on your desktop, you don’t drag-and-drop files or folders into it. Instead, you write to the cloud when you save a file on your computer. The cloud is your hard drive, and your actual hard drive is just the cache.

The idea of using the cloud to store files or sync files between devices is not new. Dropbox, SkyDrive, Google Docs, Amazon and countless others have been offering online storage for some time. Plus, companies like Mozy, Carbonite and Backblaze use the cloud to back up your files. Other services, like Megaupload or YouSendIt revolve around sharing files through the cloud.

But Bitcasa is not like any of those services. It doesn’t move files around. It doesn’t sync files. It deals in bits and bytes, the 1’s and 0’s of digital data.

When you save a file, Bitcasa writes those 1’s and 0’s to its server-side infrastructure in the cloud. It doesn’t know anything about the file itself, really. It doesn’t see the file’s title or know its contents. It doesn’t know who wrote the file. And because the data is encrypted on the client side, Bitcasa doesn’t even know what it’s storing.

So if you want to cloud-enable your 80 GB collection of MP3’s or a terabyte of movies (acquired mainly through torrenting, naughty you!), go ahead. Even if the RIAA and MPAA came knocking on Bitcasa’s doors, subpoenas in hand, all Bitcasa would have is a collection of encrypted bits with no means to decrypt them. 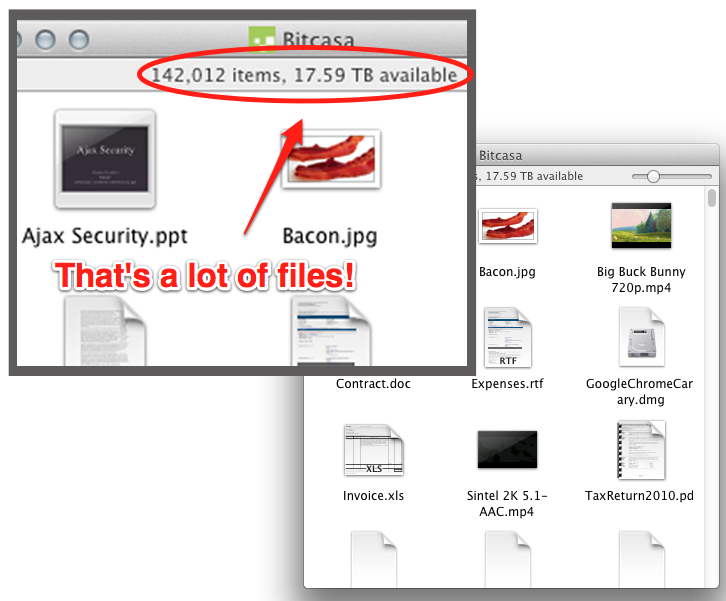 If you’re still having a hard time wrapping your head around this idea, think of it like this: instead of relying on the fallible and limited hard drive in your computer (or soon, your phone), your data is stored on an array of thousands of hard drives and streamed to you on demand. And in order to deal with the “offline” problem, the files you use the most are intelligently cached on your computer, allowing you to work when the cloud goes down, which is rare, as well as when you don’t have an Internet connection, which is more common.

Sharing files via Bitcasa is simple too: just copy and paste a file’s or folder’s link (a URL, available on right-click) and send to someone via email, IM or some other service. They click the link to have the file delivered directly to their desktop.

And the pricing! How on earth is it so cheap?

That’s the easy part, actually. Explains Bitcasa CEO Tony Gauda, $10/month still gives the company large margins. The fact is, 60% of your data is duplicate. If you have an MP3 file, someone else probably has the same one, for example. Each person only tends to have around 25 GB of unique, personal data, he says. Using patented de-duplication algorithms, compression techniques and encryption, Bitcasa keeps costs down (way, way down, but that’s it’s secret sauce), which is what makes it so affordable. Bitcasa also explained that a freemium model is on its way with less-than-unlimited storage for free.

This service sounds almost too good to be true, leaving us with questions that need still need to be answered. Does it really work? Does it slow down your computer? Can it scale? The company is positive it’s ready, but we need to see it to believe it.

Bitcasa currently has 20 patents for its technology and plans to add more in the future. It will also offer mobile applications that run in the background to do on mobile what it does on the desktop today. And it will work on other features, like real-time video transcoding, so your movies can stream to any device, without any manual effort on your part. There are even more things in the works, too, but those are being kept tightly under wraps for now.

Disclosure: CrunchFund is an investor in Bitcasa. 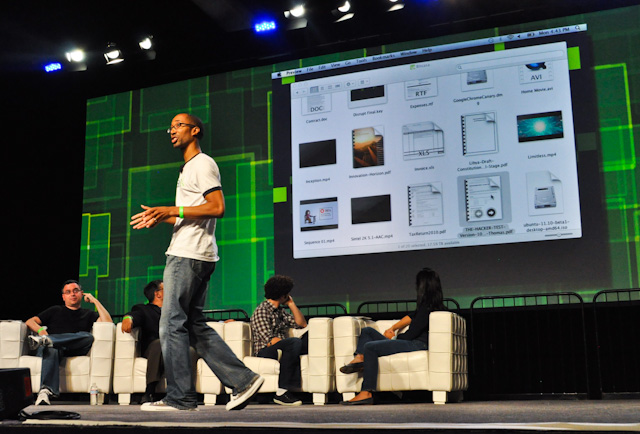 A: We have 20 patents. Most interesting, predictive capability – knows what you need before you need it. Users don’t have to do anything differently.

AL: How to compete with Apple, Amazon, Google?

A: We’re only focused on storage. We’re cross-platform. Apple’s product would only work with Apple products, for example.

JS: Can you stream movies not cached?

A: If you have bandwidth to support it. But our cache is very intelligent. Plus, people over estimate the size of data they have.

MP: Limits to use?