Austin, Texas-based startup Spanning launched a new version of its Google Apps backup service today, which now includes business-grade backup for Gmail. Previously, the company provided backup for other Google Apps products, including Google Calendar, Docs, and Contacts, but, says, Spanning Cloud Apps founder and CEO Charlie Wood, “Gmail backup has been, by far, the most requested capability from our existing customer base.”

But Google Apps is already in the cloud – why do you need to back it up?

According to the company, even a company of Google’s size can have issues leading to data deletions. And not all data deletions are Google’s fault – sometimes, the end users themselves are to blame. Then what do you do? User-deleted data isn’t Google’s problem, so it can’t (and won’t) help you recover.

Businesses, particularly the small-to-medium sized companies which currently comprise the majority of Spanning’s target market, still need to be assured that their mission-critical data is securely backed up, whether it’s in the cloud or not. 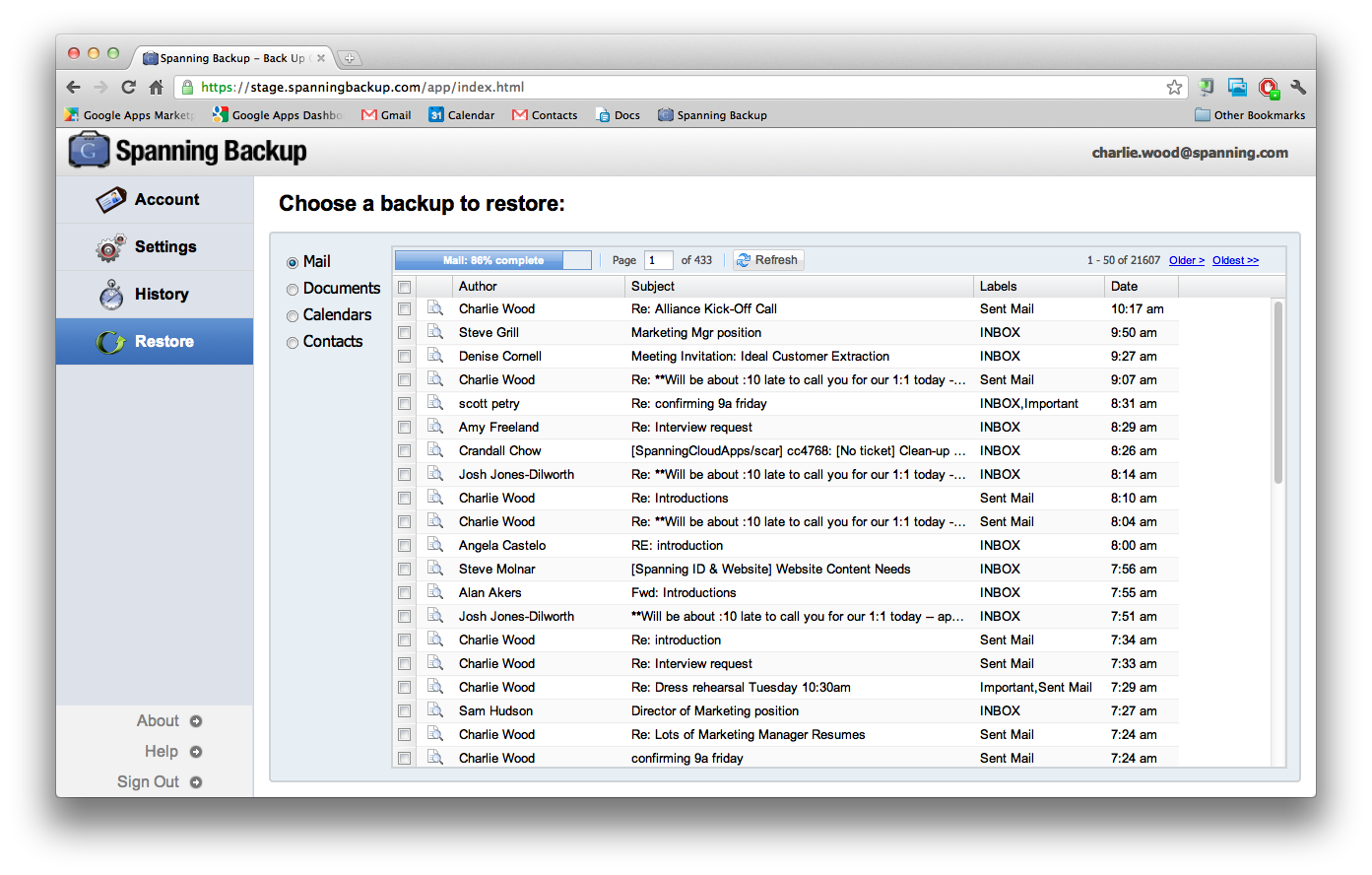 What’s interesting about Spanning’s backup product is that it doesn’t require businesses to maintain their own servers, nor does it utilize its own servers for data storage. Given that the company is still a startup, and could be prone to its own issues and failures, that latter item is a much-needed assurance.

Spanning backs up data incrementally, and doesn’t overwrite the old backups with new ones. Restorations are made possible from a simple-to-use interface. And it respects user permissions so that I.T. can’t view the file’s contents, they can only restore files when deleted.

In addition, the Spanning Backup site, application, and Google Apps Marketplace listings are certified for privacy and security by TRUSTe, the leading online privacy solutions provider. It’s  also certified under the US-EU and US-Swiss SafeHarbor Frameworks.

Wary consumers can also use Spanning to backup their own Gmail, Docs, Calendar and Contacts, too, if so inclined. It’s only $3/month for an individual account vs. $2.50/per user/per month for businesses. But consumers are not Spanning’s main focus. It’s more interested in providing businesses (SMB up to Enterprise) with a cloud backup solution.

Spanning had previously raised $2 million in funding from the Foundry Group back in April. It competes with a very similar service from Backupify, but slightly undercuts them on pricing – $2.50/per user/per month vs. Backupify’s $3/per user/per month. It also hopes to capitalize on Backupify’s growing pains, we imagine.