Cloud Engines, Inc., makers of the Pogoplug line of devices and accompanying software, are launching a new hardware product today called Pogoplug Mobile. The device works like the company’s current Pogoplug product – you attach your hard drive or drives, plug it into your router and instantly have your own personal cloud. In short, it’s like a NAS (network-attached storage) box for your home.

But with the new Pogoplug Mobile, the system has been optimized for use with mobile devices. It’s more of a “mobile accessory,” says CEO Daniel Putterman. That’s why you’ll soon find it on the shelf next the Bluetooth headsets, and not hidden away in the hard drive aisle, he says.

Pogoplug devices have typically appealed to the DIY, “host-it-yourself” crowd, who eschew using the cloud storage offerings maintained by big companies like Google, Amazon, Apple or Microsoft, or the online services from smaller startups like Box.net and Dropbox. Instead of paying for storage as a service, often through monthly or yearly fees, Pogoplug only requires a one-time investment: the cost of the hardware and software. 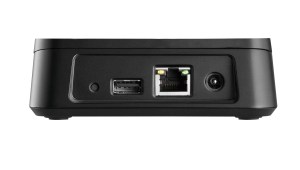 For Pogoplug Mobile, that price is $79.99 – a bit cheaper than the original device, which is still $99. The software product, which also works with the newly launched hardware, is $29. However, the software is an optional, if highly practical, add-on.

With the Pogoplug Mobile device, which works with iOS and Android via mobile apps, there are new features that the original Pogoplug doesn’t offer. For example, Pogoplug Mobile automatically backs up the photos and videos on your mobile phone to your home network. For those familiar with Google+’s “instant upload” feature for Android users, the effect is the similar. Requiring no effort on your part beyond the initial configuration, your mobile photos and videos are not only archived for you, but also converted to streamable and bite-sized formats for easier mobile sharing. 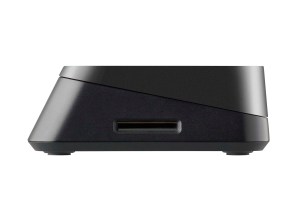 Users can control whether the syncing occurs over 3G or Wi-Fi, and whether the original media, the converted file or both should be sent back home. Android users also have the option of syncing additional directories, too, via the Settings.

So why would anyone want to use a Pogoplug when there are other options out there? As noted above, some prefer a one-time charge over a recurring fee, while other simply prefer being in control themselves. Plus, even in the case of Apple’s forthcoming iCloud, only the most recent 1,000 photos are stored in the cloud for 30 days – in order to not lose them, you still have to sync your device to your PC or Mac to keep them forever. With Pogoplug, there’s more of a “set it and forget it” appeal.

Still, despite its desire to be seen as more of a mobile add-on, the company will likely be challenged to explain these sorts of differences to end users, who are wooed by Apple’s “it just works” marketing surrounding iCloud. Why buy hardware when Apple does everything for you? Indeed, why think at all about where files live and in what format? Although Pogoplug has always had a bit of geek appeal, its desire to go mainstream is clearly visible with this product launch. Whether it can cross over remains to be seen.