E la Carte, a company that develops a tableside tablet for the restaurant and related hospitality industries, has raised $4 million in funding from Lightbank, the venture fund created by Groupon co-founders Eric Lefkofsky and Brad Keywell. The Y Combinator-backed startup previously raised more than $1 million from angel investors including SV Angel, Dave McClure, Joshua Schachter, Roy Rodenstein, and Skip Sack, a former board member and SVP at Applebee’s chain of restaurants.

As we’ve written in the past, E la Carte launched ‘Presto,’ earlier this year to bring user-friendly tablets to restaurants to bring efficiency to the tableside and ordering experience. The 7-inch tablet includes a digital menu that lets you sift through the restaurant’s food and drink selection via photos and detailed descriptions using a touch-screen interface. There’s also a section for Games, including trivia and a drawing app. And, finally, there’s a tab for paying.

Presto tablets have a full-day battery life, a credit card reader and sit comfortably and on restaurant tables. The tablets have also been designed for the tableside experience, and are more rugged than iPads.

Similar to shopping for items in an online store, the Menu feature of Presto lets eaters pick which items they’d like to order and uses a shopping cart system so you can order multiple things at once. You can also filter menus by eating preferences (vegetarian, chicken-only, food allergy) and you can also manually type in food instructions. And Presto shows nutritional information for each dish. 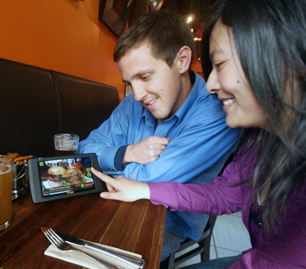 Once you click ‘order’ on the tablet, your selections will wirelessly sent to the kitchen (E la Carte integrates with the major POS systems) — and it will even give you an estimate on how long you’ll have to wait for your food. In the mean time you can start playing games or talk with your friends, which is especially useful when you are with children at a restaurant.

Once it comes time to pay, E la Carte’s software allows uses to split the tab, pay for certain items and more. The tablet comes with a card swiper, so you simply swipe your card, enter how much of a tip you want to leave (there are buttons for 15%, 20%, and so on), and Presto will actually email you your receipt.

Founder Rajat Suri tells us that since the launch in April, E La Carte has signed up close to 100 eateries with a waiting list of another 150. Early E la Carte-installed restaurants have enjoyed a sales increase of nearly 12 percent with national chain customers like Pizzeria Venti and Umami Burger already on board. And the startup has other high-profile deals in the works.

Suri says that E la Carte isn’t aiming to replace the waiter but simple make the whole experience more efficient and to fill in the gaps in tableside service at a restaurant. Suri says that installations (which take around a week) can cost as low as $200 per restaurant, or has hight $600 to $700 depending on the number of tables. He adds that Presto fits the mold of casual dining, and perhaps is not as well suited for ‘white table cloth’ restaurants.

As for why E la Carte didn’t just create an iPad app with similar functionality, Suri says that the device just wasn’t optimal for the company’s goals of creating a smaller, more lightweight, hearty device for tableside dining. Anecdotally, the startup actually exchanged emails with Steve Jobs when deciding whether to go iPad or build the hardware, and unsurprisingly Jobs advised them to build off the iPad and iOS platform.

Lightbank partner Paul Lee says of E la Carte: “This team from MIT embraces the exact type of product innovation we are seeking to partner wit…E la Carte is already receiving rave reviews so we are excited for an opportunity to help scale their commercialization.”

The new funding will be used to scale the product, for product development, and for sales and marketing support. 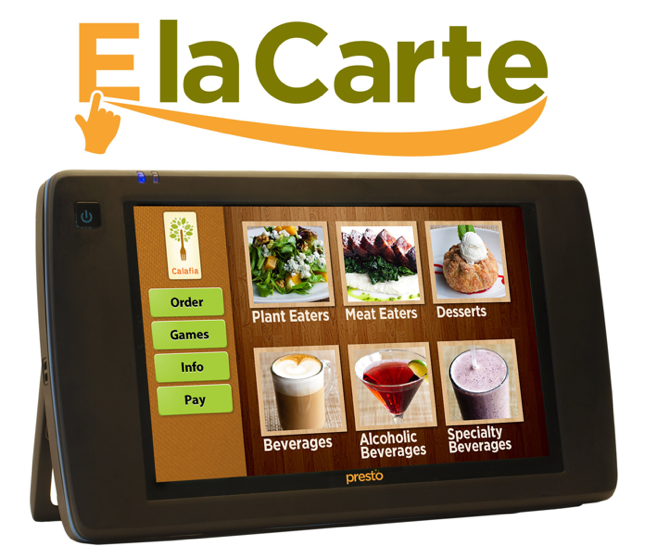