We’ve heard quite a bit about the Galaxy S II, which isn’t all that surprising seeing that it sold 3 million units in its first 55 on the market. As people from other parts of the globe got to experience the wonder that is the GSII, we here in the States played the waiting game. But it’s so close I can almost taste the Gingerbread.

On August 29, Samsung will finally unveil the GSII’s U.S. iterations in the Big Apple for T-Mobile, Sprint, and AT&T. If you haven’t already heard, Verizon is holding off on the GSII. In the lead up to the event, this image was leaked to PocketNow, which shows all three little beasts posing for the camera.

They’re all a bit different in design, most notably T-Mobile’s Hercules. If what we’ve previously heard about the Hercules is true, T-Mobile’s Galaxy S II will sport a larger 4.5-inch Super AMOLED Plus display, as opposed to the original GSII’s 4.3-inch screen.

Of course, T-Mobile’s variant may not be called the Hercules. We actually don’t know what any of the carrier names will be, although we sure have heard quite a few: the Attain (AT&T), the Within (Sprint), the Function (Verizon), and even the Samsung Galaxy S II Epic 4G Touch (also Sprint?). What a nasty mouthful, right? 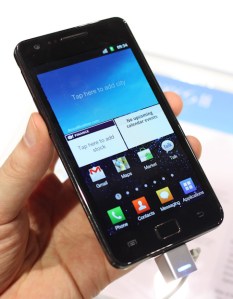 Either way, it doesn’t really matter what the phone’s called because it’ll be a hit no matter what. Just take a look at the specs: a dual-core 1.2GHz processor, Android 2.3.4 Gingerbread, TouchWiz 4.0, 8-meagapixel rear camera (1080p video capture), 2-megapixel front-facing shooter, and a 4.3-inch 480×800 Super AMOLED Plus display.

Of course, things like screen size may be different from one carrier to the next (read: Hercules), but all in all those should be the specs we’re looking at. There’s also one minor change in the U.S. variants compared to the international version, which would be the loss of that snazzy little home button. Instead, the phones will sport the same four buttons we’ve grown used to on Android.