If you own a 3D TV, you should already know about 3net. It’s a joint venture network from Sony, Discovery and IMAX that displays 3D content all day, every day, which is pretty awesome considering the amount of 3D content out there is severely lacking. It first launched with quite a variety of nature-style shows and documentaries, perfect for the 3D space, but today a more kid-friendly offering has been announced.

Programming includes the original series Feeding Time, along with Puppy Bowl (a 3net exclusive), and a number of Sony Pictures 3D family films. 3net promises more titles in the coming months, but for now, brace yourselves for Bolts & Blip and Dream Defenders. 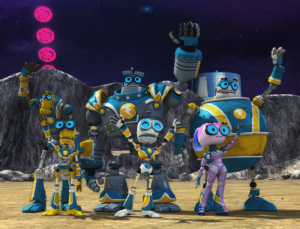 Bolts & Blip stars two best friends, who just so happen to be robots. They try their best to become battle bots to fight in the Lunar League of Robotic Sports (which so far is really exciting), until they realize that they may have bitten off more than they can chew. The series is made up of 26 half-hour episodes.

Dream Defenders, starring twins Zane and Zoey, is a story of a brother and sister who are the last line of defense to guard the real world from the scary creatures of the Dreamworld. Sounds like the same story that’s in every kid’s imagination, so in 3D it should go over quite well. Oh, and there’s also a supercomputer named Zeus. And who doesn’t love supercomputers?

After the premieres of Dream Defenders and Bolts & Blip on September 25, kids will have to wait until the next weekend on October 1 to get their Saturday morning cartoons on. Except these kids are from the future, and their cartoons are in 3D. Pretty snazzy, indeed.