If you’re a fan of cloud-based music lockers, it’s a good time to be alive. Back in March, Amazon somewhat surprisingly beat Apple and Google to the music streaming and storage punch with their “Cloud Drive” and “Cloud Player”. Both Google and Apple have since launched cloud music offerings (or betas thereof), and all three continue to improve and evolve as time marches on.

As a music fan, it’s great to see cloud music storage and streaming services moving forward in tandem, even if we all have to admit to having our own personal favorite. Because, frankly, the more competition in this space, the better. Which is why you should be paying attention to a new startup that’s entering stage left: Mecanto. Yes, today, a new cloudy music service enters the arena, promising unlimited music streaming and storage to listeners all over the world — that won’t put a dent in your wallet. (Mecanto is offering TC readers 1,000 free 6-month subscriptions. Huzzah! See below for more info.)

Tel Aviv-based Mecanto is hitting the scene this week with a cloud-enabled music-player and storage service that is easy to set up and features all the things a user wants from their trusty neighborhood music locker: Unlimited storage and streaming, the ability to automatically sync your iTunes library and PC folders with your online account (from multiple PCs), global availability, playlist editing, video, easy browsing, and cross-platform functionality. Also doesn’t hurt that users can find Mecanto on the Web, or go mobile on iOS, Android, Windows Phone, and Symbian.

The MeCanto mobile interface is pretty nifty and offers users the ability to easily listen to songs and albums, or create playlists. Songs stream over 3G or WiFi, and users can listen to any song they want without having to worry about how much space the song takes up on their phone. Here’s to you, cloud.

It’s sounds like a great start, right? Sure, but with names like Amazon, Google, Apple, Spotify and umpteen others staring them down, Mecanto definitely has an uphill climb ahead. That being said, right now affordability is a strong selling point for the Israeli music service. Take a look at its competitors: Spotify Unlimited and Premium cost $60 a year and $120 a year, respectively, iCloud comes in at about $25 a year, Amazon’s Cloud Drive and Cloud Player cost at least $20 a year (and unlimited storage may be a limited-time offering).

Google, on the other hand is currently free, but there’s little likelihood that it will stay that way for long. In comparison, at $20 a year, Mecanto is an appealing alternative to the big players, especially as it offers worldwide availability, cross-platform integration, and instant uploads — a suite which its competitors only offer in pieces. 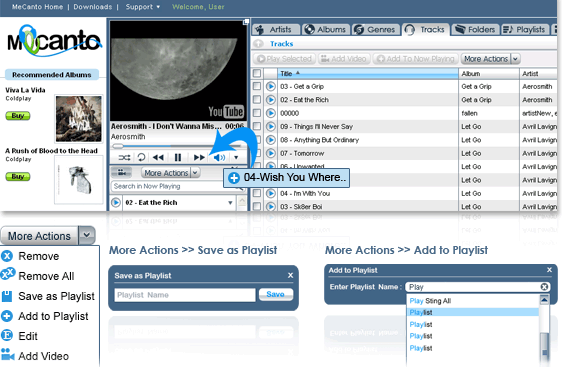 Furthermore, first time Mecanto users get a free month-long trial of the service, at the end of which they can pay $20 for the whole year or split it up at a $2 monthly rate. To begin using, users only have to download a small application to their desktops, which will then upload and sync all of your music automatically. Bada bing, bada boom. The best part: Mecanto’s upload process is accelerated, which means that users can access their music almost instantly, even before the upload is finished. Listeners can access their music right away, or they can choose to upload their files at a slower pace, saving bandwidth without having to worry about delays.

Not wanting to be antisocial in the Age of Facebook, the music service also offers social features, including the ability to add YouTube videos to one’s account and playlists as well as the ability to share those YouTube clips on Facebook and Twitter, Last.fm scrobbling of tracks, sharing current tracks to social networks, multi-desktop sync, and smart categorization of tracks. As to file support? Mecanto works with MP3, M4A, WMA, OGG, FLAC, and most of their derivations.

Mecanto’s so-called “three screens and a cloud” platform really is a great alternative to the big names in the space, and a “Dropbox for music” isn’t an unfair analogy. Sure, it’s design isn’t quite up to par with some of the others, but its affordability, worldwide availability, and cross-platform functionality may just give Mecanto the legs it needs to be taken seriously in a space crowded with familiar names.

So far, the startup has raised $2 million in funding from private angels, but you can be sure the startup will be seeking more cash as it begins to scale and rolls out worldwide.

The Israeli music locker is definitely worth a look, especially under the auspices of a free month-long trial and the fact that the first 1,000 TechCrunch readers that click here will receive free six-month-long trials of the service. I mean, who doesn’t like a music deal? Check it out.