Today, PapayaMobile, the social gaming network for Android, is announcing a new milestone: it has topped 25 million users, which represents over 940% growth since the beginning of last year. The company attributes the increase to both the growing demand for mobile social games as well as the rapidly expanding Android install base worldwide.

Papaya also released several other network statistics along with the user milestone figure, including the following:

The company showcased a few of its top-performing applications on the network, too, like Treasure Fever which sees a monthly ARPPU of $10.33, and X-City, whose ARPPU is $9.17. 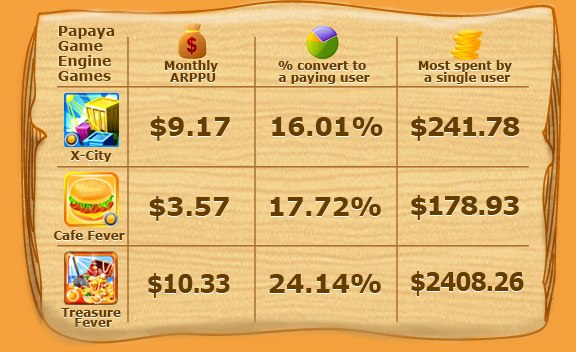 Both of these apps use Papaya’s Game Engine technology, which makes it easier to build social titles in a matter of weeks, the company says.

In addition, Papaya’s Head of Developer Relations, Paul Chen, provided his take on the recent Mobage deal from DeNA and ngmoco, which translated the popular Japanese mobile social gaming platform for Android into English and Chinese.

Says Chen, after analyzing a sampling of Mobage games:

“There is little market traction for these apps four weeks after launch. This is especially surprising considering the original versions of these titles were huge hits with millions of downloads on either iOS and/or Android. Much of the reason for the initial lack of traffic to the Mobage network stems from the fact that, in order to play a Mobage game, you not only have to download the game, but also the Mobage SNS application. This is creating a significant barrier to adoption for the Mobage platform as users do not wish to download two applications to play one game.”

At the time of Mobage’s launch in July, DeNA/ngmoco said that it would release more titles, a Mobage iOS version and expand Mobage Global to more markets. Clearly there is some rivalry here, given each company’s focus on the mobile social gaming space.