It’s been difficult to avoid news about Sony’s new line of digital cameras these past few months. Leak after leak has exposed body designs, lenses, sensor sizes, and other specs. They’re all official now, though, and while I won’t subject you to a case-by-case analysis of which rumors were on and off, I will say they were mostly on the money. The new gear looks very promising, as well.

Let’s take a look at the new camera line. I’ll try to be concise; camera spec comparisons tend to drag on, and if you want to compare closely, a dedicated photo gear site will have the whole shebang for you to peruse at your leisure. This will be a summary.

If you want the EVF but don’t want to pay the big bucks you can pick up the FDA-EV1S, which seems to have the same specs as the 7’s, for $350. The NEX-5N will be available next month, and the NEX-7 will ship in November. 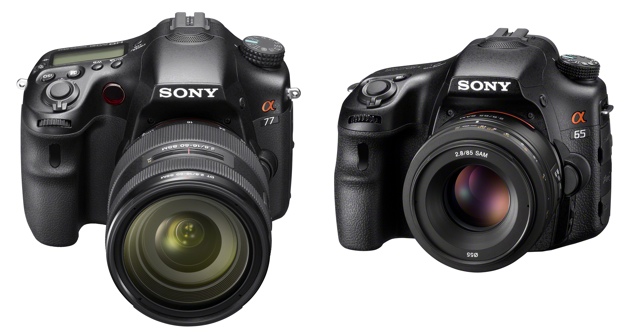 The $900 A65 and $1400 A77 get 1024×768 EVFs as well, and both take 24MP photos. The A77 has a better burst rate, more autofocus points, higher ISO capability, and its LCD is more adjustable. The flash is better, wider, and faster. On the body, the A77 has a rear dial (an indispensable feature for pros), and a joystick instead of a circular d-pad. That may be a bit too concise, but without delving into details, those are the main differences.

The cameras will be available in October.

My opinion? Well, if you insist.

These are some really convincing specs. If I wasn’t already invested in Canon to the tune of… I’d rather not say… I’d be jumping on these. The NEX-5N, though, doesn’t seem very compelling to me as a premium model without those top dials or the EVF. If it had just one, it’d be a more realistic buy. As it is, I think the NEX-7 might live up to its $1200 price. It’s too bad that nice Zeiss lens on it isn’t more compact, though, it’s a waste of a slim body to put such a beast of a lens on there.

As for the SLRs — if you can live without the rear dial and don’t rely too much on multiple autofocus points or flash (i.e. how I’ve been shooting for years), the A65 is definitely the better buy. You’re getting substantially the same body, the exact same sensor, and 80% of the features of the A77… and losing four ounces off the weight into the bargain!

We’ll try to get these into our hot little hands for review soon. In the meantime, I think that NEX-7 just became my new object of desire. 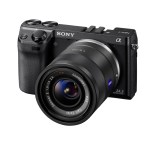 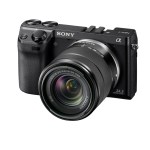 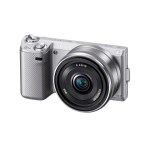