The threat of corruption is ever-present in areas like government spending, where miles of red tape, billions in assets, and a legitimate need for secrecy at times presents a potential trifecta for would-be defrauders. Slovenia, only a few notches lower than the of course upstanding USA on 2010’s corruption perceptions index, is no nest of vipers, but as a country in transition from communism, their risk is perhaps greater.

But the set of data is smaller, more manageable — which makes unified and transparent for monitoring of government spending more feasible. The country’s Commission for the Prevention of Corruption has just launched such a tool, called Supervizor, and it’s live right now if you don’t mind operating it in Slovenian.

The display of information is quite slick, as you can see, and intended for public consumption: 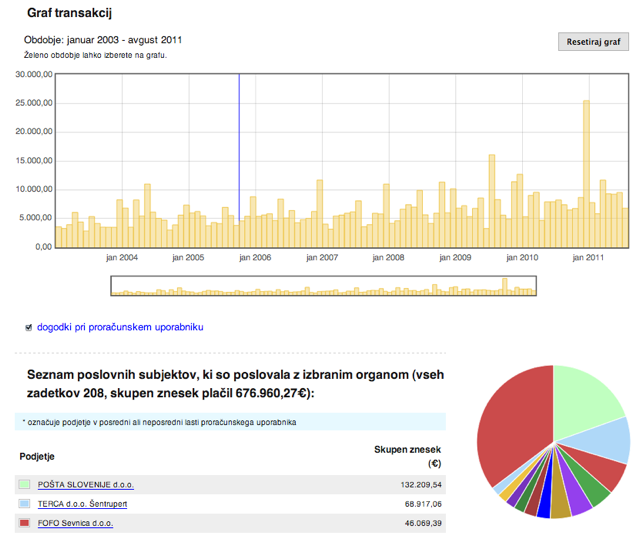 Compared to, say, the US Patent Office website, which I’ve been navigating frequently of late, it’s a breath of fresh air — though the two are not strictly speaking in the same category.

The data right now goes back to 2003, just before Slovenia joined the EU, likely coinciding with an improvement and increase in bookkeeping for that particular transition. It’s from public sources like the Ministry of Finance and Public Payments Administration, and the Committee is careful to say that it takes no responsibility for their accuracy. A strange appendix to a service where accuracy and responsibility are paramount, one is tempted to remark, but the sad truth is that numbers like this are only as strong as the weakest link in the chain, and in a bureaucracy (and all governments are bureaucracies to some extent) there are many, many links.

All the same, the information is not hiding in endless monospace text files linked from obscure ministry sub-pages. This is about access and transparency, things which ideally might lead to accountability but are not necessarily its companions.

It’s also tempting to say that something like this can’t be scaled. Surely enough, scaling won’t be easy, but then again, if you tried to describe the databases being managed by Facebook right now to a sysop or designer from five or ten years ago, they’d probably say they couldn’t scale what they had either. We’re still some distance from being able to track spending at quite this level of granularity, and with this level of accessibility, but there are plenty of projects that aim to do just that.

Try entering a search term at the bottom of the main page. I found that putting the initials of their political parties seems to work, but for example “vojaški” (“military”) doesn’t. Kudos to the engineers and designers who put Supervizor together; I hope we’ll see more of this kind of transparency from other governments and companies.

Update: I really should have included a link to USAspending.gov, which does substantially similar tracking of federal grants and contracts (though not state or city). I should admit that I didn’t think the US’s site would be as solid as it is, though I don’t think it provides as great of detail as Supervizor. Mea culpa, but at least it’s good news.

[via Funky Karaoke and Hacker News]