Facebook advertising is exploding, with ad spend on the network expected to hit $4 billion in 2011. Clearly, brands and companies are flocking to Facebook to reach users. And startups like GraphEffect are trying to help advertisers serve in more-highly targeted advertising on network. Today, GraphEffect, which is backed by Founder Collective, Lerer Ventures, and others, is launching its intelligent targeting system to the public.

GraphEffect’s platform allows advertisers to target Facebook ads using behavioral characteristics that are not explicitly expressed on the platform. So the company mines performance data and allows companies to hyper-target users in a way that Facebook doesn’t offer through its advertising platform. For example, based on likes and interests, GraphEffect can identify the type of user who would by virtual currency and target those users.

The key to GraphEffect us that it identifies certain traits of Facebook users, including likes, interests and demographics, and creates what the startup calls ‘lookalike’ models. Brands can then target to ‘lookalikes’ based on this data.

Co-founder James Borow tells me the mechanics of GraphEffect are similar in theory to the way Pandora decides to serve similar songs on its intelligent music platform. He explains that Pandora isn’t one hundred percent sure you may like a certain song that is similar to a chosen one, but serves it because the likelihood that a user would enjoy a song is strong. GraphEffect is applying this model to user data on Facebook and targeting.

The GraphEffect platform is actually built on top of Facebook’s marketing APIs and while in private beta for the past year, has helped brands like American Express, Live Nation, GE, Microsoft, Clinique, and others by optimizing their media spend to convert the type of users who buy and interact with their products and services. 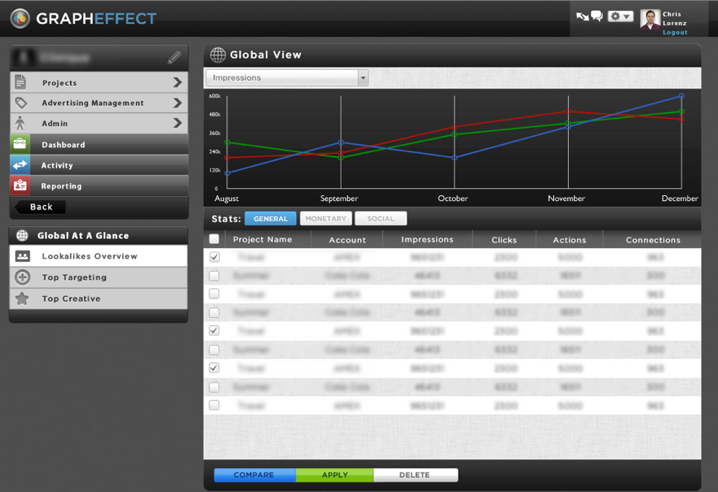