Appia, a startup that powers a white-label content and commerce platform for everyone and anyone who needs a mobile app store, has passed an important milestone—the company is now seeing 1 million downloads per day (that’s up from 500,000 a few months ago) across all of its app stores.

For background, the company powers mobile app storefronts for more than 40 partners, including four of the world’s top five handset manufacturers (Samsung, T-Mobile, AT&T, and Verizon Wireless). The bonus of using Appia’s white-label offering is that it enables its partners to deliver apps to more than 3,200 different mobile device makes and models. And company powers an App Stores for Opera Software and Telcel, Mexico’s largest operator.

In July alone, Appia’s marketplaces reached over 40 million downloads. And in the 38 months since launching, the Appia marketplace has delivered 200 million cumulative downloads, with over 100 million downloads generated in the last four months alone. In fact, Appia’s download rate is an impressive 2,282% from July 2010. Appia’s recently launched pay-per-download marketplace also helped deliver 2.5 million sponsored app downloads in 3 months for 30 partners including Amazon, Priceline and Cupid.com.

The Appia Marketplace boasts 140,000 applications from more than 32,000 developers across every major operating system, including Android, iOS, BlackBerry, Java, Windows and Symbian, with thousands of Android apps being added every month. During July, Appia saw downloads from over 200 countries and 3,500 different handsets.

Of course, for basis of comparison Apple’s App Store is seeing 1 billion app downloads per month, and has racked up an impressive 15 billion total downloads. But as you can see from the chart included in this post, Appia’s app downloads are growing at an impressive rate compared to other mobile app stores. And thanks to an exploding app download market, perhaps this growth will continue. 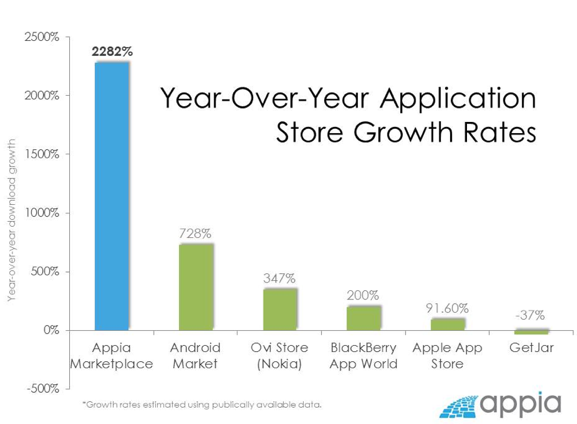