From its founding in 2007, Taptu was a startup that specialized in search and touch-based interfaces for mobile, launching a realtime mobile search engine in conjunction with OneRiot back in 2009, for example. In November of last year, however, the startup made the smart decision to bring its mobile search proficiency into the news reader market, launching Flipboard-like Android and iPhone apps that brought an interesting value proposition to bear on the burgeoning mobile reader market: Users could aggregate more than 5,000 mixed streams — no paltry number, and far more than that offered by the competition.

In April, Taptu launched on the iPad with a sleek and clean design that, again, worked to differentiate itself from competitors like Flipboard, Pulse, Flud (and perhaps Editions) by bringing its proprietary mobile search tech to bear on the aggregation of thousands of news sources, rather than relying on those tired RSS feeds. 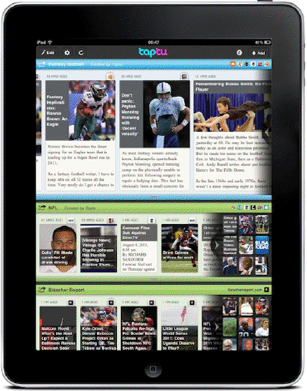 As some readers may know, the National Football League had been in the grips of a contentious lockout that put the 2011 season in jeopardy. The owners and players were recently able to come to terms, ending the lockout on July 25th, and allowing the pigskin show to go on. Seeing as football is back on, not wanting to miss out on a golden opportunity to expand their feature set, Taptu is today entering into a new athletic domain with the launch of a NFL fantasy football news stream for Taptu users on both smartphones and tablets. The new stream enables fans to receive updates on every critical stat and news item in realtime, allowing fantasy footballers to field a competitive team each and every week.

As my colleague MG wrote last week, the sports world has largely been underrepresented on tablets and news readers, because ESPN (the behemoth of sports content) has basically been absent from the space — at least in terms of partnering with other developers or startups to syndicate their content. But last week, Pulse dropped a bomb on the news reader tablet market by announcing that it was the first player in the space to receive an infusion of ESPN content, along with existing content from Bleacher Report, Yahoo Sports, and so on.

While this was a big win for Pulse, there is still an even more coveted, niche demographic that remains underrepresented on tablets, which would be none other than fantasy sports. Fantasy sports are currently played by over 27 million Americans; it’s becoming an increasingly popular pastime (and money maker). And for those who are involved, or have friends who play, fantasy sports are by and large a rabid group.

Though it depends on the sport, in order to field the best team each week, fantasy sports players have to consume a lot of information about who’s playing well, including what players are injured, or under-performing, etc. Fantasy sports enthusiasts consume a lot of news and statistics, they do their homework, like analysts, or enterprising journalists — obviously a great customer to have if you’re a mobile startup.

Over the next 30 days, loads of football fans will be building out their teams on their desktops and mobile devices in preparation for the start of the season. And now, thanks to Taptu, those fans no longer have to visit multiple websites to get the lowdown on a trade or injury. Plus, Taptu’s fantasy feature lets users mix and match from football’s big publications and blogs into one stream, making the information easy to read and glance over.

And, in a nose-thumbing at Pulse, Taptu will feature breaking news from ESPN, SB Nation, Fox and CBS Sports, among others. To find the app’s fantasy football stream, users simply go to the “Stream Store” and look for the fantasy football icon, click “+”, and the stream will be added to a user’s news collection. As before, Taptu is available for free on iOS (here) as well as Android phones and tablets (here).