As many may be aware by now, Bay Area Rapid Transit, also known fondly as BART and San Francisco’s version of a municipal subway system, has been on the receiving end of quite a bit of criticism over the last 24 hours. The criticism stems from BART temporarily interfering with cell service in four of its stations in order to stifle potentially violent protests that centered around an earlier shooting by a BART police officer.

The incident, which occurred on July 3rd, involved 45-year-old Charles Blair Hill, who was shot and killed by a BART officer after the (apparently homeless) man pulled a knife and rushed the officer and his partner, according to SFGate.com. Organizers and activists had organized a protest in select BART stations to speak out against what they deemed to be another rash and unjustified response by authority to violence in its transportation systems.

Unfortunately, this is something that BART has been through before, with the much-publicized killing of Oscar Grant in 2009. After a fight in a BART station, officers attempted to detain Grant, whereupon one officer drew his gun and shot Grant in the back. The whole incident was captured on cellphone cameras, was then later posted on YouTube, reaired on national news, and was viewed hundreds of thousands of times.

As CNET reported at the time, many people took to Twitter and other forms of social media to receive updated information on the incident and ensuing trial, in which the officer was convicted of involuntary manslaughter. Many disagreed with the verdict, however, and the many protests and violence that followed this case was no doubt prompted by the mass availability of information (including the sensitive footage of the actual killing) on the Web and social media. For good or ill.

That is not to say that BART had reason to censor cell phone activity in this most recent situation, but there’s no doubt they were fully aware of the precedent, and it wouldn’t be ridiculous to assume that this (and other situations liked it) may have influenced their reaction.

Now, as to the legality of BART’s cell communications jamming, as has been reported by SFAppeal among others, BART did not necessarily employ blocking methods that are explicitly outlawed by the FCC and, instead, according to a statement issued by the transit authority, simply “asked wireless providers to temporarily interrupt service at select BART stations as one of many tactics to ensure the safety of everyone on the platform.” Which is not necessarily out of line.

However, as CNET and tweeters have pointed out, it is still difficult to avoid comparisons to Egypt’s dictator Hosni Mubarak, who ordered Egyptian carriers to essentially turn of the Internet to prevent citizens from organizing. Naturally, Twitter has already created its own hashtag for the BART kerfuffle: #MuBARTek. Although the comparison may be a little dramatic, it’s certainly understandable.

Even if one takes the stance that BART was acting under the law, and acknowledges that BART will probably regret its actions (if it doesn’t already), the United States was outspoken in its condemnation of Mubarak for the Egyptian government’s interference in digital communication and, while this certainly isn’t an incident of nearly the same scale, it does make the U.S. look hypocritical, as the U.S. government pushes for macro web freedom and freedoms in all forms of digital communication. If we are to supposedly hold ourselves to high (or higher) standards, then this kind of action is really not acceptable.

As Marvin Ammori, an oft-cited lawyer and expert in internet law, media law, freedom of speech, and cybersecurity, pointed out in an insightful and well-written post, though many have been up in arms over BARTgate being a prime example of a glaring first amendment violation, in the big picture, it’s hard to argue the case. There’s a lot of wiggle room in the courts for scenarios in which a government agency suppresses free speech not because of its content, but in content-neutral terms to protect citizens from violence or danger. Higher courts will often rule against it being some kind of sweeping violation of first amendment rights.

As Ammori points out, BART officials believed that protests in its stations “could lead to platform overcrowding and unsafe conditions for BART customers, employees and demonstrators”, which do indeed “sound like content-neutral reasons”. 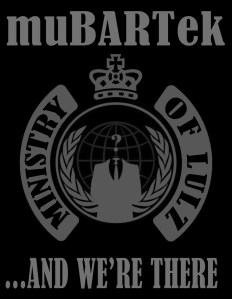 Of course, as Ammori goes on to say, BART did indeed turn off “the phone network at a specific time that it expected a protest, and a protest directed at transit police”. And the transit authority’s reasons for doing so were certainly due to the fact that they expected that the protests could potentially turn violent. Thus, “if BART was trying to suppress speech because of its content or to stop violence”, he says, “it likely can’t meet the constitutional test and has violated the First Amendment”.

Whether or not BART is guilty of violating first amendment rights, and is eventually taken to court, many experts are calling for further FCC scrutiny of this decision, and there likely will be.

And as scrutiny, investigation, and analysis of these types of incidents are slow-moving, especially when they involve a government agency, many hackers have of course already begun tweeting in support of the protestors, and Anonymous has already released a digital flyer with the hashtag #MuBARTek, as first reported by CNET.

Whatever the case, many of us can likely agree that this is a step in the wrong direction for freedom of speech in the U.S., especially as it relates to freedom of communication by digital means and cannot allow the silencing or interference of government agencies in protests or demonstrations. How, if not for potentially violent demonstrations, would this country have accomplished any sort of civil, philosophical, or governmental progress forward?

Undermining the authority of Internet or cellular discourse, no matter how small the incident, sets the wrong precedent and sends mixed signals to other countries and burgeoning digital communities around the world. It’s just not good policy, and it makes us look stupid.