I’m sure many of our readers have come across a situation where they’d have liked USB to carry a bit more power to their devices. Your phone or iPod, charging ever-so-slowly, or perhaps an external drive that only works on “powered” USB ports — or must be plugged into a wall socket. A wall socket, in this day and age! I ask you!

Fortunately, the SuperSpeed USB group (or whatever shadowy illuminatus it is that truly controls USB) has decreed that the next generation of the USB 3.0 standard (PDF) will include support for a shocking 100 watts of power. That’s enough to keep ten drives running, or an LCD, or even an entire laptop. And believe it or not, it uses the same cables and ports we’ve already got.

This really is rather a large jump from the 5 standard watts or 10 extended watts found in normal USB ports. Even the vaunted (and electrical-sounding) Thunderbolt only delivers 10W. With 5Gb/s and 100W of power, the USB spec could be entering a second spring here. The ability to power larger and more sophisticated devices, like printers, monitors, and speakers, could make it even more universal than it already is. It’s a real leg up on the Thunderbolt/Light Peak designs, which, while they can handle the data from ten external drives, likely couldn’t power more than two of them. The cables should be able to handle about 1.5 amps of current. It’s not clear how the power load division will be altered, but it seems reasonable to suppose they’ll be increasing the number of concurrent loads. 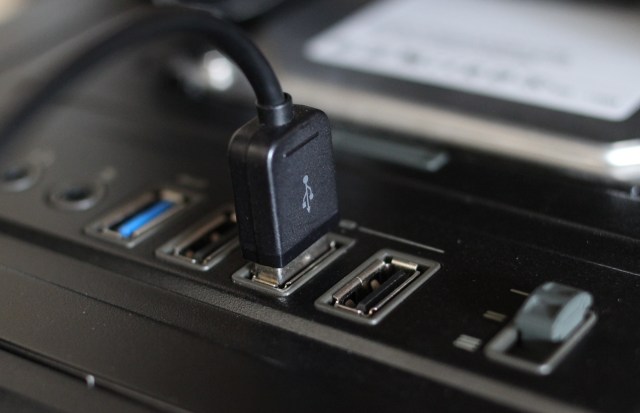 Now, despite the fact that this new spec would use existing cables, there are potential problems. Not all motherboards and power supplies are prepared for this kind of power transfer, and improperly managed, these high wattages could burn out components, tax the PSU, and cause overheating. Charge-carrying USB cables of poor quality already melt and catch fire. But it’s disingenuous of me to suggest this as a drawback when the power is carefully monitored by the USB controller and it should only use wattages and currents tested and known to be safe with given classes of USB devices. I’m more worried that few devices and computers will have the power overhead to support this, since they likely pick PSUs carefully tailored to the power draw requirements of the system.

Fears of outdated hardware bursting into flame aside, I think this is quite exciting. It’s a serious increase and could enable a completely different accessory ecosystem. Don’t expect to charge your devices ten times faster just yet, but after the design is finalized in early 2012 (it’ll be previewed at the Intel Developer Forum in September as well), you could reasonably expect some very interesting USB-powered devices.