Launching officially to the public today is a new venture called MediaCore, brought to you by Damien Tanner and Stuart Bowness, the former of whom was responsible for Pusher, a solution that adds realtime tech to apps that was funded by the Heroku guys, among others, back in June.

Tanner and Bowness are launching MediaCore to provide any old small business with the ability to roll out their own YouTube, allowing the organizations to control that experience from end-to-end. In other words, MediaCore is a SaaS video publishing platform (complete with mobile apps) that provides any user or organization with the ability to create and control their own video site. And it’s all about good looks.

As to how it works, customers upload content into the platform’s cloud-based infrastructure and let videos play through MediaCore’s player, which, among other things, automatically determines which browser the user is connecting with so that they don’t have to worry about differences between Flash and HTML5. The player sorts that out for you, using HTML5 whenever possible.

Visitors can browse video collections through a cool visual guide, and the platform allows owners to easily organize their videos by category, or tag, and automatically sorts content by relevance and popularity. Users can add logos, backgrounds, and play with CSS to customize the appearance of the site. Plus, you can add your own domain, take advantage of podcasting, and quite a few other nifty tools. Considering the fact that creating a full-service video platform is no easy feat, MediaCore is offering a pretty cool white label solution that looks good and doesn’t require a lot technical know-how.

MediaCore is currently offering a 15-day free trial, and after that, plans start at $99 a month. Those plans include custom domains, white label player, custom branding, automated encoding, social video embeds, etc. But the best part is that Android and iOS apps come with every account, while managing to look pretty damn good, too. Coming next? According to Tanner and Bowness, it’s private video, profiles, and paywalls.

To get the platform off and running, the startup is in the process of closing a seed round of angel funding from Andrew Wilkinson, the founder and CEO of MetaLab and Jesse Ma of Gawker Media. While the founders declined to give specifics, the round is likely in the hundreds of thousands. (Of dollars, that is.)

When I asked them what the inspiration was for MediaCore, they told me that other video platforms out there are stacked with engineers and often pay little attention to design, resulting in crappy interfaces and a series of botched user experiences. So, after running an open source version of MediaCore for a year, they’re bringing their SaaS platform to market, in an attempt to lead with design first and make it easy to use.

The beta version of the platform has already attracted over 1,100 companies, including London University, Mentor Graphics, TechVibes, Indiana University, and a variety of Fortune 500 companies. As one might guess from its early customers and the scalable cloud storage, the product is aimed at SMBs, but the founders told me that within the year they will be launching a series of personal plans that will be offered below the current $99-a-month pricing.

MediaCore also plans to launch a Tumblr-like theme store in the near future, which will allow users to buy themes and customize their sites, all working via an API (a la Tumblr).

All in all, when the paywalls roll out and a proper iPad interface drops, MediaCore is probably going to essentially be the video version of OnSwipe. Is that a good thing? You tell us.

For more, check out MediaCore at home here or a front-end demo, click here. 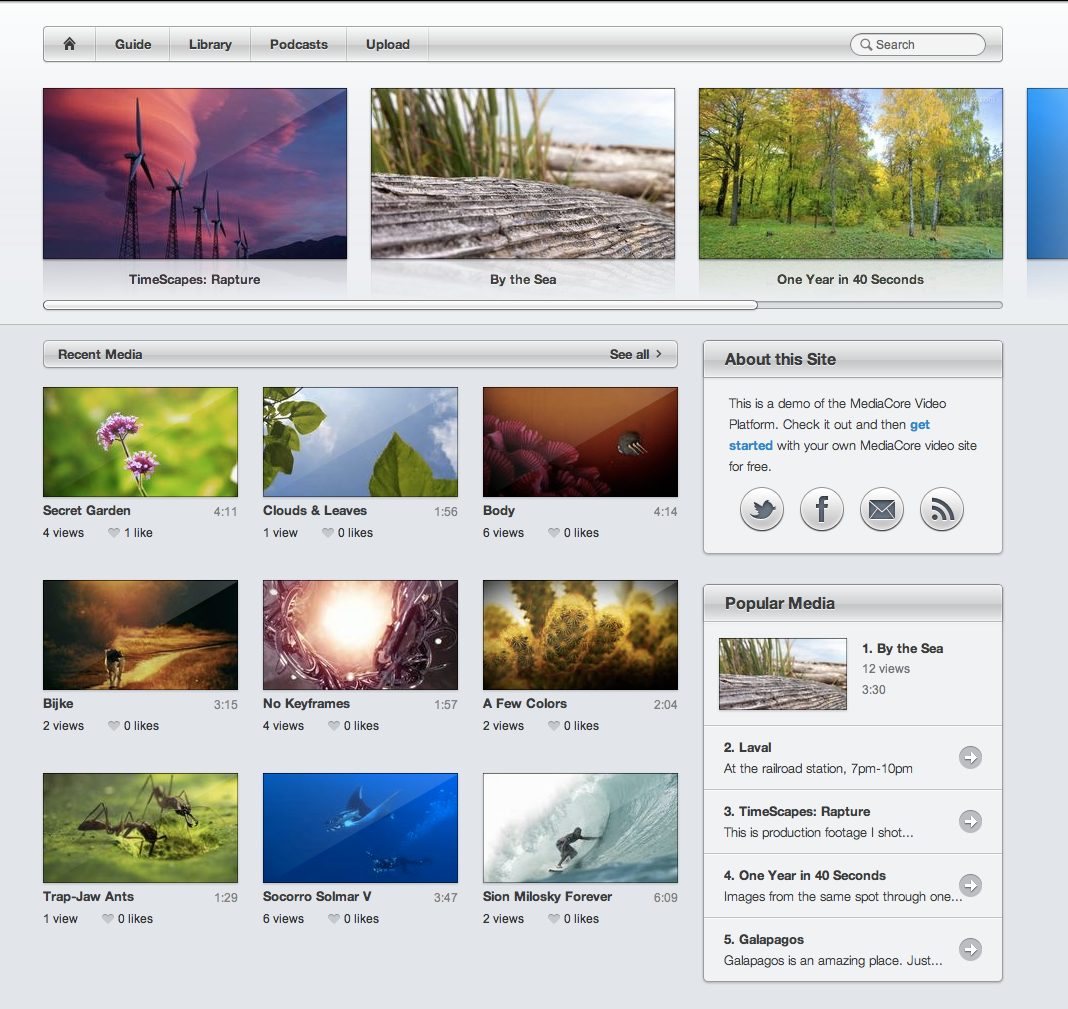