When it comes to file sharing, there is no shortage of tools and services to help you transfer your files, big and small. There’s the old tried and true approach on email, or using VOIP services like Skype, or cloud-based services like Dropbox and Box.net, or the browser-based Ge.tt, to veterans like WeTransfer and YouSendIt. Then there’s newcomer, the social and sharing-focused Minus, which recently scored $1 million in funding and Sendoid, whose launch we covered back in March. The list is long, but new sites continue popping up, because no single business has a stranglehold on the market, and each method of file sharing has its drawbacks — and its limits.

A new startup launching in beta today, incubated in the most recent summer batch of Y Combinator companies, called Kicksend, aims to make it even easier to send and share large files, especially with one’s non-technical friends and family members. There are plenty of file sharing services available, but many of them are confusing to use or have needlessly complicated UIs, are expensive, or come with too much fine print. Even Dropbox, though it’s relatively easy to use, requires an installation process — which may be too involved if you just want to send a few files.

Email is great for small files, but with Gmail’s capacity restriction at 25 megabytes, for example, one needs to go elsewhere to send larger files. And sending via IM and Skype is synchronous, meaning that you need the other person to be online in order to accept the transfer. So Kicksend is trying to offer a better way that lets users automatically receive and download files, even if they’re not there to push the “accept file” button.

For now, there are two ways to use Kicksend: Through a web and desktop app. (Mobile, the important third piece to the puzzle, is on its way and should be available soon.) Users can sign up for an account or just login with their Facebook account to view which of their friends and family are already using Kicksend. Once a user is logged in, they follow a simple three-step process to send the files. Simply drag and drop the files (of any size) into the interface/prompt on Kicksend’s homepage and select the recipients, (the recipients need only an email address, they don’t have to be Kicksend users), and, then, press send. Fairly straightforward, methinks.

Kicksend also makes it easy for users to create lists of recipients, allowing easy group file sharing, and because the site offers realtime functionality, users will see instant notifications (Growl-style) on both the start of transfer and completion. Each file also has its own comment thread, which makes it easy for users to enter into a private conversation about the specific files being sent. Kicksend’s group file sharing and lists are similar in conception to Google+’s circles (except for file sharing, of course).

The site is currently free for up to 1GB of sending bandwidth, and, according to Kicksend Co-founders Pradeep Elankumaran and Brendan Lim, the startup’s future monetization strategy consists of adding premium features, wherein users will likely get a 10GB capacity per month, as well as delivery alerts, and a full set of detailed analytics. The startup also plans to add an enterprise plan for businesses, which will offer notifications, analytics, as well as the ability to mark certain files as fully “private”.

So far, just on a word-of-mouth basis, Kicksend has amassed 15,000 registered users and has sent over 40,000 files. At this point, the founders said, photos have been the most popular files shared, but musicians have also been using Kicksend to transfer large GarageBand files, as the use cases continue to diversify.

Kicksend’s desktop apps, available both for Mac and Windows, allow users to easily send big files, automatically downloading the files to the recipient’s computer. The founders gave the example of the case in which someone sends you a large batch of photos via Kicksend, and the desktop app automatically receives the files and will instantly organize them on your hard drive — all with direct hooks into your social graph via Facebook connect.

The startup’s backend infrastructure is also optimized for content delivery, so that it can rout any type of media and data to any end point; and when the startup launches its mobile apps, users will be able to take a photo on their phone and instantly rout the image to any other device.

The web app, too, is seamless and easy to use, allowing a user to browse all the files he or she receives and sends. The UI is simple, and really seems intended to have Kicksend become part of the infrastructure of one’s daily life, both on the desktop and on the web. Your parents are going to love it. 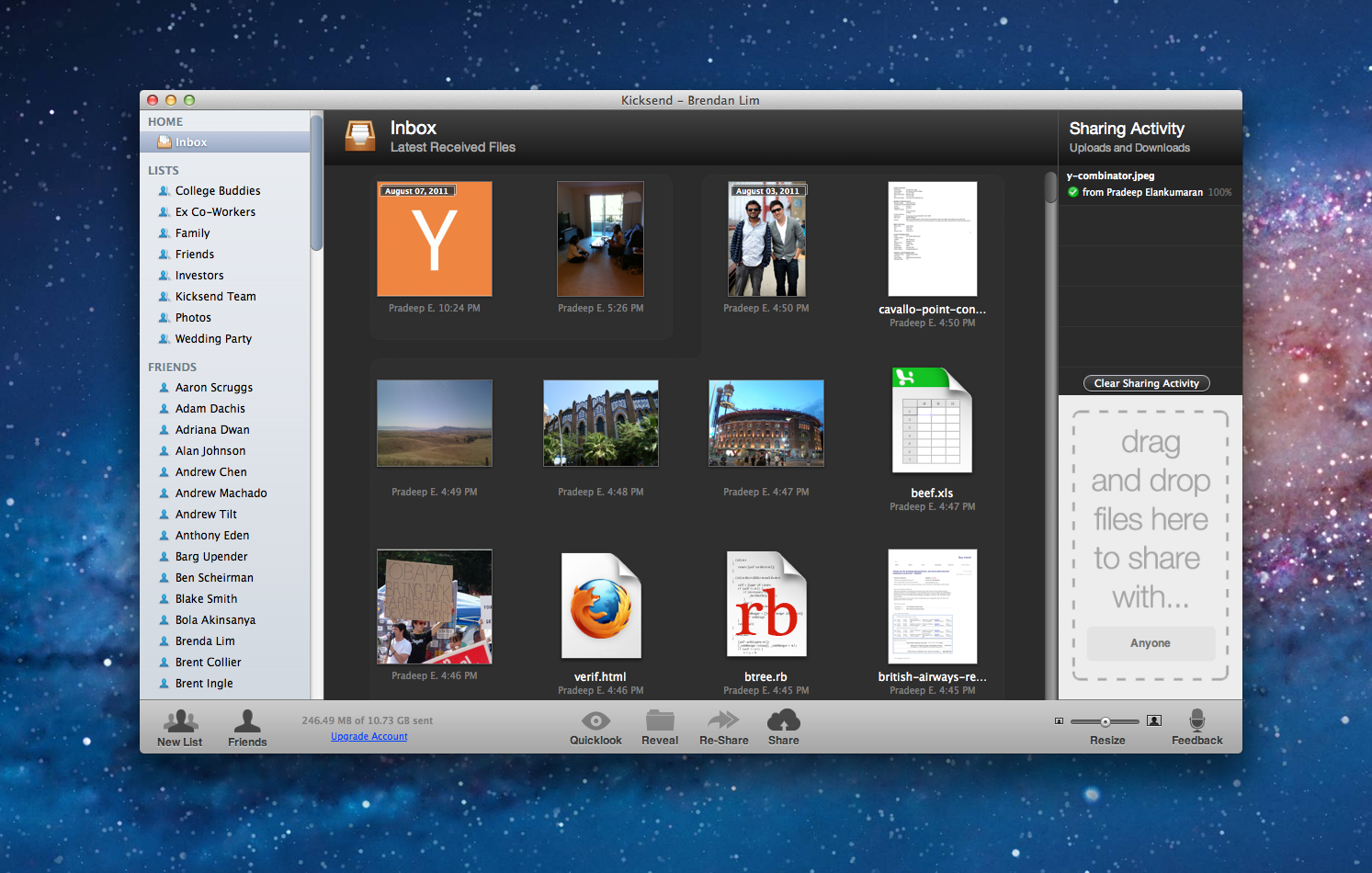