Walmart is planning to launch several new projects this holiday season based on the technology it acquired from the social media startup Kosmix back in April. Kosmix’s platform previously powered multiple services, including a Twitter search site called TweetBeat, a health vertical called RightHealth and a homepage where users could search the Web by topic. But the core of what Kosmix was building was something called the “social genome” –  a way to organize the content in social networks in order to connect people with the information that mattered to them.

Now, that same technology is in the hands of Walmart, the world’s largest retailer.

These days, Walmart.com does around $6 billion per year in sales vs. Amazon.com’s $34 billion, according to analysts. “Walmart had fallen behind in e-commerce,” says Anand Rajaraman, Kosmix Co-Founder now SVP of Walmart’s Global e-Commerce division, “and the board realized the issue was serious.”

Something had to change. 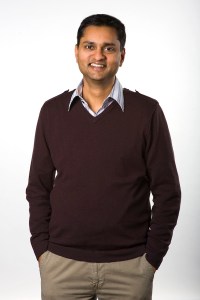 Although Rajaraman wouldn’t go into detail about the handful of projects Walmart has planned, it’s easy to read between the lines at guess at their nature – social search on Walmart.com, personalized alerts on rollbacks sent to email or mobile, Facebook-enabled social wish lists or gifting applications, and who knows what else may come in the future.

In April, when Walmart acquired Kosmix, it had already raised $55 million in funding from a number of investors throughout the years. What made Kosmix appealing was not just the technology itself, but also the people behind the technology: founders Venky Harinarayan and Anand Rajaraman, successful e-commerce pioneers who had sold their previous company, Junglee, to Amazon. At Amazon, they worked with CEO Jeff Bezos to transform Amazon into a retail platform, and invented the technology that now powers Mechanical Turk.

When Kosmix was acquired, it became the nucleus of a new group at Walmart known as @Walmart Labs, based in Silicon Valley. At WalmartLabs, the founders have been busy developing projects which will integrate the Kosmix technology into Walmart’s online and mobile offerings, including its e-commerce website, Facebook pages and more. There are three main areas of focus for the team: search, recommendations and serendipity.

In search, Kosmix’s technology will pull data from Facebook and Twitter to improve your search experience on Walmart.com. By monitoring your ever-changing interests on topics like your favorite sports team or band, for example, Walmart will be able to serve better recommendations when you search its site. It might work this way:  you search for a new smartphone, and Walmart recommends one you friend just liked on Facebook .

Walmart plans to leverage your social data outside of search, too. It plans to directly recommend products on its homepage. At Amazon, explains Rajaraman, there’s too much emphasis placed on your purchases for recommendations. “Purchases are a window into your interests,” he says “but they’re a small window.” Anyone who has ever purchased a gift at Amazon only to be suggested similar items upon every subsequent login knows the problem. Instead of recommending more travel guides for Paris, long after your trip was complete, or more power tools, long after Dad’s birthday has passed, Walmart plans to recommend things it actually knows you like. Whether or not it can succeed where so many others have failed will soon be put to the test.

And these tools can be used to analyze your friends’ behavior, too, in order to offer wish list suggestions based on their interests. Assuming they get it done, the way Walmart is leveraging Twitter and Facebook here could be an industry first.

If that sort of deep dive into your personal preferences sounds creepy, well, at least this is an opt-in system. Rajaraman says Walmart will never use consumers’ data in any way beyond what it has permission for, and your’e in control of that. But he thinks consumers will be willing to share there information in return for tangible benefits. Benefits, like discounts? While Walmart has no plans introduce huge discounts like Groupon offers (it’s happy to provide “everyday low prices,” says Rajaraman), it will be able to personalize alerts on items it puts on “rollback,” its own system for promoting sale items.

Instead of spamming you with notifications, Kosmix’s technology will be able to identify what sort of rollbacks you, as an individual, would like. This is what he means by “serendipity” – alerts that will surprise and delight consumers.

You may even be able to one day receive in-store notifications as you pass by items of interest that match those pulled from the Kosmix system. As for what technology would be used on the mobile side, Rajaraman couldn’t say. But the company is experimenting with several approaches for providing mobile services, including things like NFC (near field communication), barcode scanning and in-store geo-fencing. However, these fall outside of the @WalmartLabs team’s domain – they’re more focused on the data.

The first projects built on top of Kosmix’s technology will launch this holiday season.