Google just made it easier for you to invite friends to its new social network, Google+, by providing a short link you can post on the web or share with others over instant messaging. In order to get the link, says Google product manager Shimrit Ben-Yair, you simply click the “invite friends” button on the right-hand side of the stream – the same place invites were found before.

This news was announced yesterday by Google engineer Balaji Srinivasan, but the functionality didn’t go live until last night.

With the new feature, you have the ability to invite 150 more people to the network. 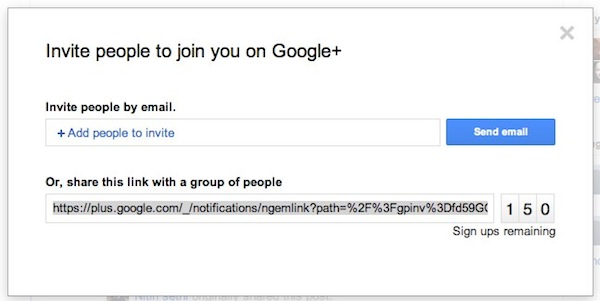 I remember wasting hours on Twitter last month, handing out invites by manually (and painfully!) copying and pasting email addresses sent to me through @ replies or direct messages into the Google Plus invite form. This is so much easier. I can just tweet out a link and be done with it! I think I’ll do that right now, actually. And it looks like I’m not the only one, if this Twitter search is any indication.

There is one minor problem with the link, though – you have to shorten it yourself if you post to Twitter or you’ll end up with a mess like this. Why didn’t Google provide an automatically shortened link using its own URL shortening service Goo.gl? You know, the one it called the “stablest, most secure and fastest” URL shortener on the web? That seems like a missed opportunity indeed.