It’s an established fact that tweeting about your breakfast is a serious faux pas, on par with ‘Liking’ your own Facebook status update. However, recent trends indicate that tweeting a photo of your breakfast is perfectly acceptable, and in some cases, even encouraged. Your friends don’t want to read about your oatmeal — but they’d love to see it with their own eyes, preferably after it’s been passed through a ‘Sutro’ filter.

Behold, the power of the photograph.

These days you can’t navigate a popular app without bumping into a feature that lets you swap or edit photos, and it seems a new photo service is cropping up every week. Which is why Aviary, the company that produces a suite of powerful web-based image editors, has decided to help coordinate a Photo Hack Day that’s dedicated to building photo apps. And they’ve managed to land a sponsorship from NASDAQ to pull it off.

Photo Hack Day will be from August 20-21 and is being held at NYC’s General Assembly (which is also very involved in putting the event on). Tickets are free of charge to participating developers. You can sign up right here.

Aviary’s Alex Taub, who heads the company’s business development and partnership efforts, says that this will be the biggest photo hackathon ever organized. And, assuming things go well, the company intends to launch a global hack day this winter that will simultaneously take place in NYC, SF, Israel, and cities in Europe.

Of course, it’s hard not to notice the big sponsor for the event: NASDAQ. This is slightly surprising (it isn’t often you hear about stock exchanges getting involved with startups, unless it’s to help them IPO), but we’re told NASDAQ will have more to share on this front in the near future. NASDAQ is also coordinating a very cool prize for the top three apps built during the hackathon: they’ll be showcased on the NASDAQ screen in Times Square. 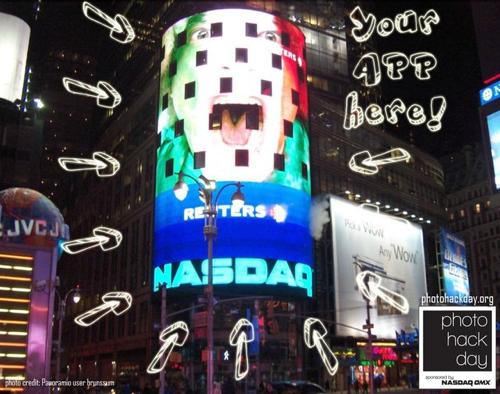 Here’s a quote NASDAQ had for today’s announcement:

“NASDAQ has driven grassroots innovation since it created the world’s first electronic stock exchange 40 years ago,” said NASDAQ OMX Senior Vice President, Corporate Communications, Frank De Maria. “NASDAQ is excited to sponsor the 2011 Photo Hack Day at General Assembly and support the start-up community in New York in their pursuit of innovation. We can’t wait to see the results.”

Update/Disclosure: A few days after this was published Aviary asked if I’d like to be a judge. So, see you there!

Throughout the course of the event companies will be presenting details about their  photo-based APIs to developers, in the hopes that they’ll use them for their projects. Here’s a list of companies participating so far: