When Zynga acquired mobile game studio Newtoy last December, the social gaming giant took command of one of the Texas gaming studio’s most popular titles, Words The Friends. For those of you who aren’t familiar with Words With Friends, the mobile game (iOS and Android) is similar to playing a Scrabble-like word game against one of your friends. Today Zynga is announcing an upcoming web-based Facebook game for Words With Friends today (according to Zynga, the game will be launching ‘soon’ but there is no specific date).

Words With Friends challenges players to create words by placing letter tiles on a digital game board in order to score points. Similar to Scrabble, each letter is given a point value and players earn points by completing words in sports on the game board designated with bonus points. It is a multi-player game, which makes it ideal for a social platform like Facebook. While the iOS and Android app offered Facebook connect, this is the first Words With Friends web-based game housed on Facebook.

Features of the Facebook game include a brag feed, which allows you to publicly call out your friend on their wall after scoring. You can also send Facebook requests that notify friends when it’s their turn to play, or send a message to invite a friend to start a new game.

Games can take days or even weeks to complete, and players may be involved in up to 20 games simultaneously. Additionally, players on iOS and Android devices will be able to port their games between their mobile devices and Facebook.

Zynga says this is the first time it is taking a mobile game to Facebook instead of the other way around (CityVille, FarmVille).

A Facebook version of Words With Friends should be popular considering the traction the game has seen on mobile platforms. As Inside Mobile Apps reported recently, the acquisition of the Newtoy and Words With Friends, helped grow Zynga’s number of daily active users on mobile platforms by tenfold in seven months. In a recent SEC filing, Zynga revealed that it was able to double the daily active users for Words With Friends four months after the acquisition by “combining the two companies’ scale and know-how around social game mechanics.” 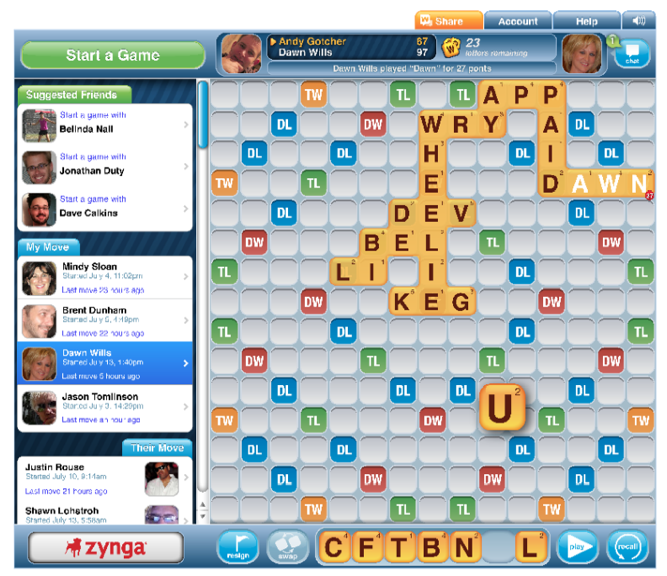