Polling site Gopollgo  has recently closed a $325K seed round of funding from Idealab, in addition to launching a product and site refresh with a focus on gleaning more insights from Twitter followers.

With the new wood-paneled Gopollgo site users can build and customize polls in seconds, easily send them to Twitter and watch as Gopollgo provides realtime analytics and location drill down data for voting.

For example: It took me about 10 seconds to build this “Where should I go on vacation?” poll and am now having a real fun time watching who is on the page (why aren’t you at work Andy Brett?!), how many people have voted (106 Votes) and how many times the poll has been viewed (693 views). It’s also pretty amazing to watch the votes come in separated by state — It seems as though the state of California is pretty into me going to Burning Man quelle suprise.

“Just imagine a big brand doing the same thing and getting information back instantaneously.  Super powerful,” Gopollgo co-founder (and former TechCrunch developer) Ben Schaechter tells me when I relay to him how cool this is.  Since he implemented the realtime analytics features, the site has seen registered users hitting up 25 polls per visit, with users from Twitter spending on average eight minutes on the site.

Schaecther plans on using the new funding to hire more engineers (the team is currently a foursome) and plans on eventually monetizing the product by offering partnership deals and premium features like page branding. 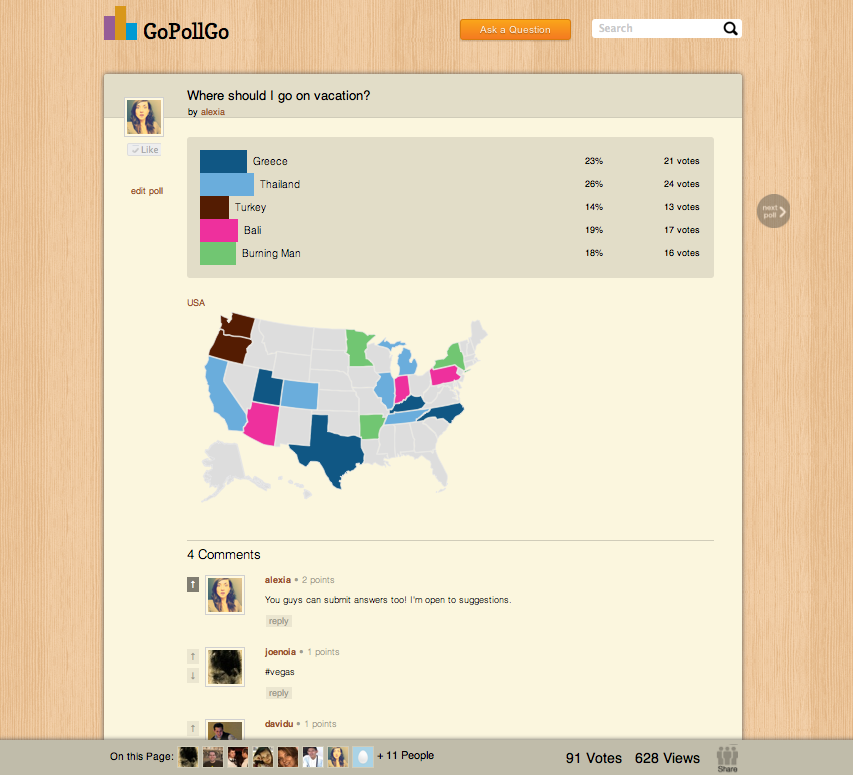