Short Version
As a long-time fan of Olympus’ Micro 4/3s series of cameras, I came to the E-P3 expecting good things. I was not disappointed. The camera is like Mini Cooper or a Smart car: it gets you where you need to go, you have fun on the way, and the resulting savings in size, bulk, and, in some ways, price makes it a great second camera for a DSLR buff or a great first camera for someone just getting started in the world of removable lens shooters. 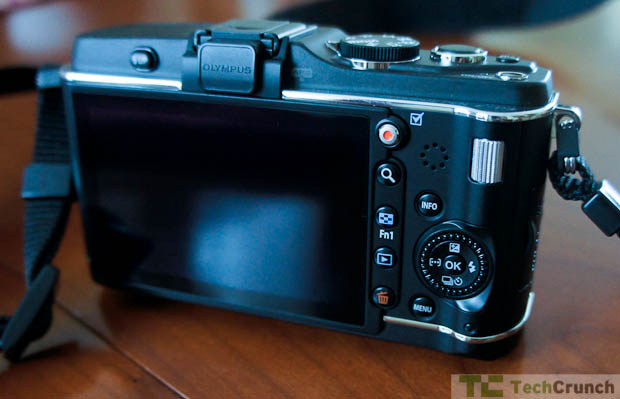 The E-P3 is Olympus’ most expensive and largest M4/3 camera. Their current line-up includes the E-PL and E-PM (Lite and Micro, respectively) cameras, each designed to be a little smaller and lighter than the last. To put it in Apple fanboi terms, the E-P3 is, then, the iPod Touch while the E-PL is the Nano and the E-PM is the Shuffle. Each of these cameras can mount any of the M4/3 lenses Olympus manufactures. 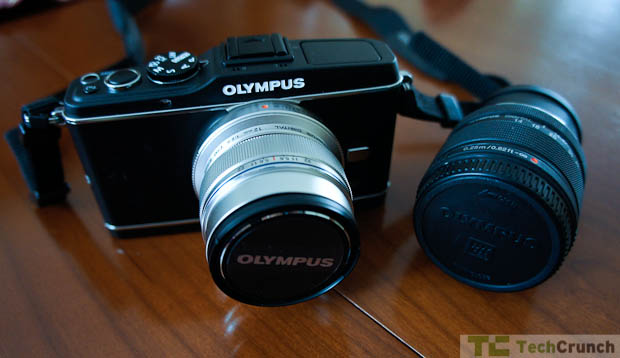 The E-P3, then, is the granddaddy of Olympus’ M4/3 line. The MSRP of $899 gets you the camera and a M. Zuiko Digital ED 14-42mm II R f3.5/5.6 Zoom lens (or a 17mm prime lens, but that’s may be a little less useful for beginning shooters) and the camera comes in silver, black, and white. It weighs 13 ounces and is five inches wide. It has a 3-inch touchscreen that allows you to instantly focus on any part of the image with a single tap. A mode wheel on the top offers various shooting modes while a separate Function button allows for quick access to the camera’s various settings. There is a dedicated video button on the back of the camera and the on/off switch is carefully recessed, unlike the buttons on previous Olympus M4/3 cameras.

There is no optical viewfinder although you can purchase an after-market viewfinder that fits into the camera’s hot shoe. A pop-up flash button hides on the left rear edge while a number of quick-set buttons and dials grace the rear for manual control of aperture and speed. The front is featureless except for the lens release button.

A full run-down of every feature is far beyond the scope of this review and I’m coming at this from a user’s perspective. To be clear, if you’re looking to read this review and then pick apart my camera prowess in comments, go here instead. I’m an enthusiast, writing this review for beginning enthusiasts including, but not limited to, folks taking a long trip, new parents, and wannabe street photographers. I’m essentially comparing this camera to entry level offerings from Canon (the Rebel series, perhaps the G12 most specifically) and Nikon (the D60 and D80). I am fully aware that you are a camera god and can shoot a wedding using only an old Quaker’s Oats box with a hole pricked in the front and a piece of muslin covered in gelatin silver halide. This camera is clearly not for you.

The question I’m attempting to answer is this: can a non-pro/prosumer shooter use this camera to get great pictures. In my experience thus far I’ve found that it is more than feasible and, in fact, this camera could replace a similarly priced and outfitted entry-level DSLR. The speed, auto-focus, and feature set makes it an excellent camera for around-the-house and travel snaps and professional lensmen (and women) will enjoy the size and portability combined with the excellent performance.

The Camera
Beginners will probably take to this camera fairly quickly. With the kit lens and the Auto and Art settings, folks used to a point and shoot can, well just point and shoot their way towards relative success. Multiple on-screen menus and prompts ensure you know what’s going on behind the scenes and the art mode menu is surprisingly easy to use. Instant, on-screen reproduction of the effects and settings ensures that you aren’t caught by surprise when the camera takes something you weren’t expecting.

In iAuto mode (essentially intelligent auto sans a forced flash) the camera offers a number of on-screen prompts for setting saturation, brightness, as well as “motion zoom” (grabbing a bit of smudge off of a moving object) and “background blur” which adds bokeh (blurred backgrounds) to portraits and the like.

The Scene mode offers multiple scene settings including Macro, sport, “children” (of the swiftly moving variety), and evening/night photography. The Art mode allows you to add multiple filters to a scene including sepia, grainy film, and a tilt-shift effect. These are fun at first and quickly become boring once you realize that you can actually take quality photos with this thing.

I shot mostly in P (Program) mode and had excellent results in all sorts of light. Beyond focus, I did very little speed, ISO, or aperture adjustment and took some excellent pictures of the family on a few short trips.

The best thing about the Micro 4/3s platforms is the ability to quickly and easily remove and replace lenses. However, M4/3 (MFT) cameras are mirror-less, thereby making them more compact. The lens, as it were, shoots the image straight onto the sensor. I found myself drawn to the new 12mm f/2.0 “pro” lens (which costs $800 freaking dollars) but I got similar performance from the kit lens as well as the surprisingly effective M.Zuiko Digital ED 40-150mm f4.0-5.6 (a more manageable $299). Do you need a lot of lenses? No (I’ll discuss this in depth below), but it helps. 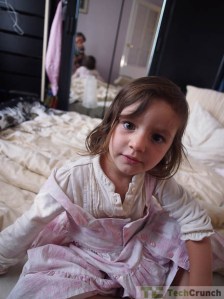 This photo, for example, was shot with the 12mm lens at ISO320 with at F/2.0 1/60 sec. It was an off-the-cuff shot of my daughter and I think it is more than adequate for the average shooter. The fact that I was able to get her to sit still for the 1/60th of a second it took to shoot her is a testament to the speed and auto-focus capabilities of this camera. 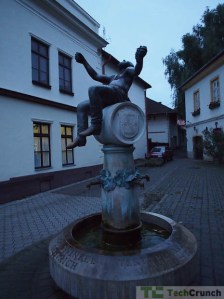 This shot of Bacchus, on the other hand, was shot at ISO1600 in 1/23 sec at F/2.2 (with the same 12mm lens). This was shot at near dark in the rain and, while it could do with some brightening, it was a good shot given the conditions. Obviously the quality of the glass in both of these shots played a large part in the quality of the shots.

$899 lens or no, in all, I got some excellent shots with the E-P3 without much fiddling. Olympus has considerably improved auto-focus (and they’ve reduced the amount of noise during video recording) and I’m pleased to note they’ve improved the out-of-the-box color quality. Formerly most of the E-P series of cameras had a nasty habit of trending towards orange and red, even with the white balance set properly. This was not an issue in this camera.

The Lenses
If you are just starting out, the kit lens is fine. I also really like the 17mm, $299 pancake lens for street shooting as it allows for a fuller, in-focus frame and is good for portraits and wide-angle shots. These are the only two lenses you’d really need initially and if you never buy another lens, these two are more than sufficient.

The aforementioned 40-150mm is a wild zoom lens that can really bring distant objects closer (the storks on the chimney, in the gallery below, were shot with that lens). If you have the cash and the impetus, the $899 12mm is amazing and takes great shots in any light. This lens really makes a difference when grabbing nice, clean portraits and rich, luminous landscapes. 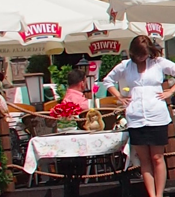 If I saw any problems it was some slight blue/purple fuzz on some subjects. There were also some slight focus aberrations that occurred when shooting quickly but were difficult to reproduce.

The caveat is this: if you intend to purchase only one lens, you may not be ready or particularly need a MFT camera (or a DSLR, for that matter.) There are plenty of excellent point and shoots available including the G12 and S95 from Canon or the P300 from Nikon. Investing in a single platform is a hard bet to make but I’m fairly certain the MFT line won’t die out, leaving enthusiasts high and dry. Although some of the lenses (like my favorite 12mm) are wildly pricey in general terms, the prices can get worse when you enter the high end of the DSLR spectrum.

The Bottom Line
This camera isn’t for everyone, but it offers enough value and performance that it could easily replace the standard, entry-level DSLR and, thanks to the compact body and fairly reasonable pricing (considering the build quality and performance) you’re looking at a nice camera for an acceptable price.

While I cannot, in good faith, recommend this to someone who may or may not want to invest in at least one lens to go with it, I would recommend it as a second, portable camera for travelers and as a nice around-the-house camera for new parents and grandparents. It’s strong enough for a nerd yet made for a beginner.

There are many arguments for and against supporting the MFT format and I look forward to a hearty back-and-forth in comments. However, as someone who has lugged a full DSLR kit around the world, being able to slip something as powerful and compact as the E-P3 into a small bag and still get great photos is a welcome feeling. It’s an impressive piece of kit and well worth considering.

A Note On the Gallery
My limited skills produced these shots, but Robin Wong’s shots and Koon Yik’s e-book offers a bit more quality, especially when compared to my ham-handed attempts.