Back in March 2010, WePay launched to the public as a group-payments platform — one that makes it easy to coordinate things like fraternity dues and bills that you share with your roommates. They’ve since expanded to offer event ticketing and support for donations, and today they’re launching a feature that puts it in even more direct competition with PayPal: WePay Stores.

The feature lets any site integrate a storefront by inserting an embed code (sites can tweak the appearance of their new storefront using CSS). No merchant account is required to set up a store — you’ll just need a WePay account. You can see an example of a store at Startuptees, which has been using it for the last week.

There are already other solutions that do this, but CEO Bill Clerico says that WePay Stores is easier for site-owners to implement because WePay is handling both the storefront and the transaction (other solutions often rely on a third-party, like PayPal, to handle the payment processing, so they can be more complex to set up).

As for solutions like Shopify, Clerico says there are typically monthly fees involved with the storefront, in addition to payment processing fees. WePay is only charging for the payments (fees are 3.5% of transactions with no per-transaction cost), and sees the stores as a way to increase transaction volume. Ultimately, though, it’s probably in your best interest to compare the fees associated with each store, as your ideal candidate will depend on how much your average price point is.

In addition to the embeddable store, WePay is also launching a Stores API that will let websites create merchant accounts on the fly (which is useful when a site wants to let users accept transactions).

Other alternatives to WePay include Etsy and Weebly, both of which let you set up a storefront without having to know how to actually build a webpage. 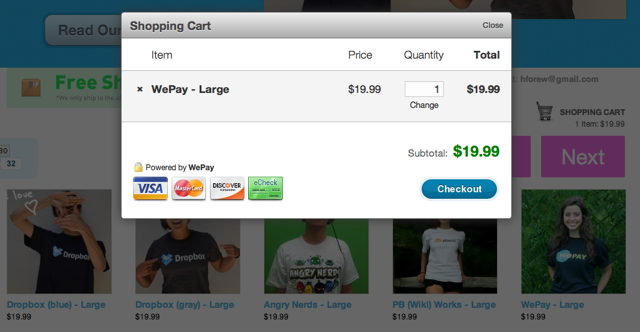